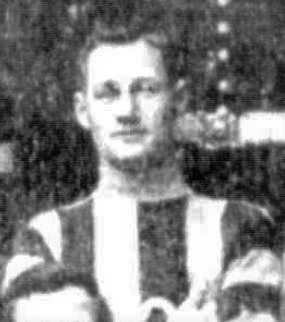 David Earsman was born in Swan Hill in 1882, and later relocated to Melbourne where he played football with distinction for Northcote and Fitzroy Juniors. In 1909 Fitzroy recruited him, and he represented the Maroons in losses against Carlton, Collingwood and Essendon before disappearing from Fitzroy’s records.

Four years later, Earsman was again playing good football in Northcote’s defence when he bobbed up at Princes Park. He was 31 years old by then, but he must have made an impression, because Blues coach Jack Wells selected him for the game against University at the MCG in round 5, 1913. Wearing guernsey number 26 and playing in a back pocket alongside Ernie Jamieson and Harry Haughton, Earsman was rarely sighted as Carlton won an entertaining match by 16 points.

Whilst that victory consolidated the Blues’ place in the top four, Earsman was omitted from the team for the next game, and not recalled until round 10, when Carlton easily accounted for Essendon by 27 points at Princes Park. Stationed on a half-back flank, Dave again didn’t see much of the football. He was dropped once more, and couldn’t earn another recall before the season (and his VFL career) ended with the Blues fading to sixth after the last round of the season.

By then Earsman was living locally, and employed by the Melbourne & Metropolitan Tramways Board at their North Carlton depot, probably in a reserved occupation that prevented him from enlisting in the First AIF during World War 1. Instead, he joined the Australian Volunteer Militia, serving with the 38th Fortress Company of the Royal Australian Electrical & Mechanical Engineers. Dave’s older brother John Earsman meanwhile, had volunteered for active service at the age of 38. He embarked for France in 1915 and was badly wounded in action, but thankfully survived and returned home in 1917.

Two years later, on the 19th January, 1919, Dave Earsman died at the tragically young age of 37. Although no details have yet been found, he may well have been a victim of the Spanish influenza epidemic that was sweeping across the world at that time – a tragic event that eventually killed more than 20 million people

The Argus May 22, 1913 (p14) reported that a permit had been granted for David Earsman to transfer from Northcote to Carlton.

.*There is a D. Earsman who appears in an Australian Garrison Artillery Team photo taken in 1908. Possibly this would have been a Militia unit and not a full time Army based team.
Third row from front, third player from the left. If this is Dave Earsman he would have been 26 years old.
http://nla.gov.au/nla.news-article222985233
Although further verification is required, a cropped image from this team photo is now on this page and in Dave's image gallery. (see below)

Dave's first Carlton game was Round 5, 1913. There is a very good quality image of the Carlton team that day on the match page.
There are two Missing Heads that are pictured, Dave Earsman and Andy O'Donnell. Perhaps Earsman can be indentified from this team photo and therefore O'Donnell as well.
If anyone can identify either Earsman or O'Donnell please contact Blueseum.