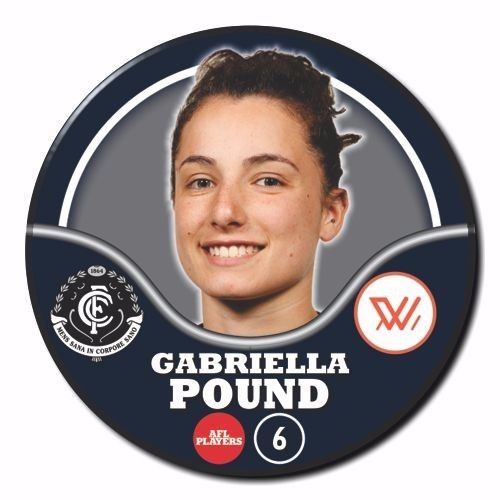 When Gabriella Pound has the ball in hand, the opposition better look out, with senior women’s coach Damien Keeping describing the No.30 draft pick as “dangerous”. The young forward is an elite kick and exceptional decision-maker, who can also play down back if required. “Gabriella has a real passion for the contest and is one of the most damaging players in the game,” Keeping said. “We’re very excited to have a player of Gabriella’s ability wearing the navy blue jumper in 2017." Pound was drafted by Carlton with the club's fourth selection and the thirtieth overall in the 2016 AFL Women's draft. She made her debut in Round 1, 2017, in the club and the league's inaugural match at IKON Park against Collingwood. Pound is of Sri Lankan descent through her father.

Albury's Gabriella Pound drafted by Carlton Blues
ONE of Albury's own will be a part of the next revolution in women's sport in Australia. Former Albury High School student Gabriella Pound will play in the first AFL Women's league next year after being selected by Carlton with pick 30 in the national draft on Wednesday. Pound, who will turn 22 this Sunday, said she was excited to be a part of what will be a first in Australian sport. “I'm ecstatic,” she said. “It's incredible to think that five years ago girls couldn't play at the highest level. “Now the AFL is getting us involved, it’s fantastic.” Pound moved to Melbourne to study to be a paramedic in 2013, where she has been playing for Melbourne Uni in the VWFL. She was one of 16 Melbourne Uni players to be picked up by one of the eight clubs to field a team in the inaugural competition. “I've loved playing for the Uni, they're like family and have brought me so far as a player. “But to be a part of a professional club like Carlton now, to have access to professional coaches like the boys have had for decades is amazing. “It's going to be exciting to see what happens from here.” Likely to start on a wing when the league kicks off in March 2017, Carlton coach David Keeping told the club’s website she would be a ‘dangerous’ player. “Gabriella has a real passion for the contest and is one of the most damaging players in the game,” he said. “We’re very excited to have a player of Gabriella’s ability wearing the navy blue jumper next year.” Gabriella’s mum Fran Pound said being part of the first league made the moment all the more important. “It’s so special, I’m proud of her and I’m also proud of the group who have pushed for the women’s league to become what it is,” she said. “We never would have thought she would go this far, she started playing Auskick at North Albury when she was little. “She was pretty good, but she had to stop after a while. “Both her brothers went on to play senior football, they were down there with her when for the draft, we thought that would be a great moment for them.” Gabrielle’s father David Henricus said he couldn’t be more proud. “She had that upbringing with her brothers (Isaac and Lachlan Pound), she was probably good enough to play on any of the boys’ teams,” he said. Gabrielle was vice-captain at Albury High back in 2012, while twin sister Annierose was captain. - Chris Young; Border-Mail.