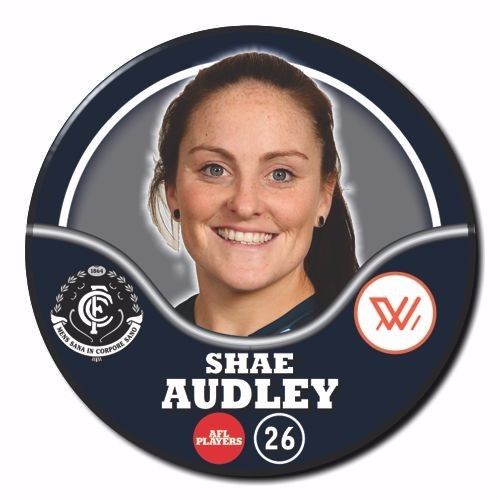 A fierce in-and-under midfielder, you’ll usually find Audley at the bottom of the packs. The No.46 draft pick's competitive nature means she enjoys the physical aspect of the game, always tackling opponents no matter what their size. Senior women’s coach Damien Keeping says Audley is always able to find her own ball when the game is on the line. “Shae has an incredible ability to find her own ball and use it well,” Keeping said. “Her impact deep within contests will be critical to the success of our midfield. The coach also noted Audley is a player you love to play with, and despise playing against.


Audley optimistic in defeat
Carlton midfielder Shae Audley is confident the Blues will receive reward for effort when they seek to return to the winners list against the Western Bulldogs on Saturday. An inspiring fourth-term charge wasn’t enough for the Blues to overcome Melbourne at Casey Fields on Saturday, going down by six points in their second consecutive narrow loss. While disappointed in the result, Audley says the team has reason to remain upbeat. "I don’t like losing, I don’t think anybody does, but I guess we will have to turn it around,” Audley said. “We implemented a lot of structures and did a lot of hard running. We have to take the positives from the Melbourne game and use them in preparation for this week.” The 27-year-old finished with nine disposals and a game-high five tackles against the Dees, continuing her consistent season. As a primary-school teacher, her strong form on the field has only enhanced her already strong popularity at Laurimar Primary School. “The school has really got behind me,” she said. “When I’m on yard duty at work I have kids come up and ask me questions. They just follow me around and ask to kick the footy. “Every week they (students) tell me if they’ve seen me on TV, or in the paper, or even if their Nanna has seen me in the media.” Carlton returns to Ikon Park on Saturday in a bid to defend its undefeated home record. Despite the Bulldogs having registered just one win, Audley says the Blues won’t underestimate the task ahead. “We will go into Round 5 prepared for the Western Bulldogs to bring their all. With Emma Kearney and Ellie Blackburn through the middle we have to make sure we shut them down,” she said. “If we stick to our structures and keep that communication up, we’ll hopefully come out on top. “You never feel better than when you play on your home ground. Knowing how we play at Ikon Park, I think we’ll really take it up to the Bulldogs.” Carlton faces off against the Bulldogs at Ikon Park on Saturday 4 March from 11:35am, as part of a double-header with the Blues’ JLT Community Series match against St Kilda. - Lucy Watkin, Carlton Media March 1, 2017