It’s reasonable to assume that Alan Mangels was still learning to read and write when the kid first put pen to paper for the Carlton Football Club more than 40 years ago.

It was June 9, 1967, when Mangels - then 10 years and 314 days old - became the youngest player in history to sign with the Blues. This incredible detail only recently came to light when Carlton Football Club historian Stephen Williamson discovered the paperwork whilst indexing entries in the League’s Permits Ledger at AFL Headquarters.

Mangels, whose grandmother Margaret was the sister of the fearsome Carlton premiership captain Bob Chitty, preferred not to dwell on the past when contacted about the signing.

But Mangels’ father, Alan Senior, was more forthcoming in his explanation of the circumstances surrounding his son’s history-making pledge to commit to the mighty Blues and further the family’s connection with the club.

“The situation was that we lived in Merlynston, North Coburg, and moved to Oak Park – a North Melbourne zone,” Alan Senior said. 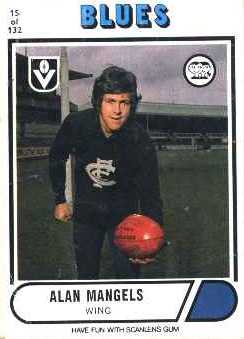 “The reality was that if Alan hadn’t signed with Carlton within the year he would have become a North player, and he was a very good junior player with Merlynston . . . a little fat kid who I once saw get 45 kicks in the first half.

“Now my mother, who originally came down to Melbourne from Corryong with Bob (Chitty), lived at 66 Nicholson Street, East Brunswick, near Brunswick Road. Margaret was good friends with (former Carlton full-back) George Ferry’s father who was an optician.”

“Margaret used to go down to the thirds and supply afternoon tea for the players and officials, and Alan was a porky fellow who used to tag along behind her. Mum was close to the team manager Harry Stone, so Harry knew him.”

Alan Mangels Senior, who himself represented the Carlton Under 19s in its premiership years of 1948 and ’49, the latter as captain, could not recall the day his son signed, but certainly remembers the day he turned out with the thirds in 1969, against Fitzroy at the old Brunswick Street Oval.

On-field contemporaries at that time included the likes of Bruce Doull, Robert Walls, Phil Pinnell, the late John O'Connell and Andy Lukas (or Lukimitis), but young Mangels was just 12 years old at the time.

“In their wisdom they decided to sit Alan on the bench for what was one of the last games of the season. The coach, Bill Hoogen, brought him on for the last ten minutes of the match and he manned up on a bloke who was huge,” Alan Senior said.

It’s hard to envisage that Mangels represented Carlton even earlier – as captain of Carlton’s inaugural Little League team of 1967. Within a decade, he’d emerged as a Gardiner Medallist for best reserve grade player in the competition.

Awarded the No.10 guernsey vacated by dual Carlton premiership rover Adrian Gallagher, Mangels made his senior debut in Round 15, 1974, against Richmond at the MCG. At 17 years and 348 days he became the 14th youngest Carlton player to do so. Mangels went on to represent Carlton in 88 senior matches between 1974 and 1980, having called on his experiences as an impressionable kid in the days of backyard football.

“From the time he could walk I made him kick both feet,” Mangels senior said of his boy. “I used to get him out in the street, put a mark on the ground, and make him run along the mark and drop kick both feet. If you reckon (Barry) Cable was good at it, then Alan was bloody terrific.

“One day he came back from Carlton training and said ‘They’ve told me drop kicks are out, they’ve made them redundant’. . . it then took him about two or three years to kick over the mark.”

Mangels later represented Geelong in 13 senior appearances between 1981 and 83 before calling an end to his League career.

“My time was a long time ago and that’s past history,” Mangels junior, now 51, and living in Carseldine, Queensland, said recently.