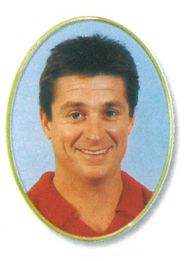 Brad Campbell played reserve grade football for Carlton in 2001. Campbell was also used as a top-up player for Hawthorn reserves in 1997. He played some senior football with Melbourne from 1993 to 1994. Campbell is the son of Des Campbell, who played exactly 50 games for Melbourne in the 1970s. This meant that Melbourne were able to use the Father-Son Rule, to secure him in the 1992 AFL Draft. He participated in their reserves premiership winning team in 1993 but didn't play a senior game that year. The following season he made his first and only league appearance, when he played in Melbourne's 77 point win over reigning premiers Essendon at the MCG.

After leaving Melbourne, Campbell returned to the Goulburn Valley Football League, where played for three clubs. He started at Kyabram, where he was a member of a premiership team in 1996, then went back to Tongala.

2004 - 12; Campbell headed to play for Goulburn Valley Football League club Mooroopna. Initially he went as an assistant coach but was later appointed as senior coach for the 2008 season and also continued as a player. Campbell would coach the club for the next five years and take them into the finals in each of those years. Campbell would play 101 senior games, and win three Best and Fairests during his nine years at our Club,

2013 - Campbell was an assistant coach at the Murray Bushrangers in the TAC Cup.

Campbell was originally recruited from Tongala, he was playing at Kyabram when he was called up to play reserve grade football for the Blues.