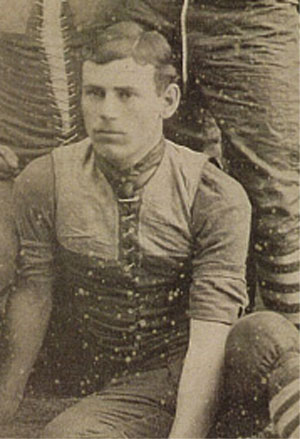 According to Volume 3 of Origins of Australian Football, "Geordie" White was recruited from Essendon in 1887
The Weekly Times May 05 1888 said he was from Essendon and a follower.

1887 April 09
Bulli Relief Charity Match, Carlton played Fitzroy at Brunswick Street.
A player with the name White was selected in the Blues squad.

White played in the Carlton vs England match at the M.C.G. June 23.

1891 July 11
G. White declined, along with Walter 'Dolly' Batters and Peter Williams, to play against South Melbourne at Melbourne because water covered most of the ground.
Wallowing through pools of black slush, Carlton won 2.5 to 0.4.
( The Carlton Story, H. Buggy and H. Bell p69)

1891
"Geordie White as a player who has distinguished himself in the past, and is now regaining some of his former brilliancy. This is his fourth year with Carlton, so at the close of the season he will be entitled to the memento prize for having played constantly during that time, in accordance with the rules of the club. Previously he was a forward player with Melbourne; but he did better with the Essendon club, having carried off the prize one year for best all-round play, especially in the following department. His qualifications at that time entitled him to a place in the Intercolonial team, in which he performed creditably"
(Evening Standard July 31)

1893 March 29
G. White was elected to the Carlton committee at the AGM.

Old admirers of George White, who a few years back played such a sterling game for Carlton, will be pleased to hear that he has been very successful in his mining operations in the mountains of Gippsland. At the end of 1894 things were so dull in White's trade in Melbourne (the "black" or iron industry) that he seriously considered the advisability of trying his fortunes in Western Australia.
However, some of the old Carltonians dissuaded him therefrom and advised him to try for gold much nearer home, with the result the Sturdy Georgie fell into luck's way and is now pleased that he stopped in Victoria, and is able to meet old friends in good form. Mrs White and the family are all located "midst snow and ice" with the Gippsland mining man, who looks a perfect picture of health.
(Table Talk June 17 1898 p20)