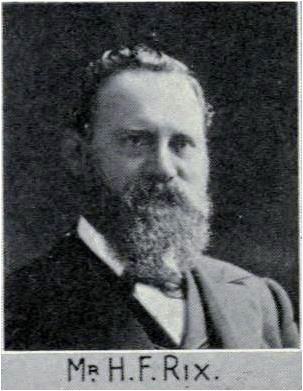 "Of the men who have labored and passed away since 1900, Mr. H. F. Rix deserves to be especially remembered. Working under the result system, he foresaw the new day and strove to make it possible. His enthusiasm, his industry, his initiative, his research, and his sympathy made him a great inspector and a leader in educational reforms"

(A History of State Education in Victoria, p274)

1872 September 09
" The ranks of the club have been strengthened by the return to Ballarat by one of its old and best players - Mr. Rix - who showed by his strong kicking abilities the acquisition he is to the club. With a few like him, and some of the dons already in the club, Ballarat ought to do more than hold its own in the football arena next season." (Ballarat Courier p2)

H. Rix is listed in the book "Origins of Australian Football" as being on the 1873 Carlton team squad.

1873 May 31
Rix is named in the 23 man squad for the match against Albert Park at Albert Park.
The match was terminated after a marking dispute arose.

1873 July 19
Rix played in the Carlton 2-1 victory over Melbourne at Melbourne.
(The Argus)

According the Australian Dictionary of Biography, Henry Finch Rix, was born 12 January 1848 in Woolwich Kent England, and his family migrated to Victoria in 1853. He was a teacher at Bendigo, Ballarat and at Carlton. After a brief stint teaching in Ballarat, he was a mathematics master at Wesley College Melbourne 1874-1884.
"A nervous, quick-eyed man, he earned a deserved reputation as a distinguished and enthusiastic teacher whose popularity with the boys was not diminished because he played with the Carlton Football Club and because as sportsmaster he devoted much time to school athletics."
Henry Finch Rix B.A., Inspector of Schools, died 27 February 1906 at 32 Great Davis Street South Yarra.
See http://www.adb.online.anu.edu.au/biogs/A110411b.htm

1882 May 27
"At the conclusion of the match yesterday sennight (week) between the past and present boys of Wesley College, at a meeting of "old boys" was held to consider the advisability of forming an Old Boys Association. Mr. Rix and Mr. Brown, masters of the Wesley College, were present. It was heartily agreed to call a general meeting of "old boys" for the purpose of forming such an association. A temporary committee, consisting of Messrs. Rix, Brown, and Royce, with Mr. Royce as secretary, was elected to make all necessary arrangements for the meeting." (The Telegraph St. Kilda, Prahran, and South Yarra Guardian p7)

INSTIGATED THE ESTABLISHMENT OF SCHOOL LIBRARIES

In his role as Inspector of Schools, North East Victoria, Beechworth (from 1884), Henry Rix sent out a circular to all school boards in the Colony for the establishment of school libraries.
To read click here> http://nla.gov.au/nla.news-article6279084
(Trove: The Argus September 14 1889 p11)

Henry applied for a Patent for "Improved set of apparatus for teaching the first steps in arithmetic." in 1903.

In 1905 he wrote a book called "The proposed Australian decimal coinage; a criticism and an alternative proposal."
Rix also wrote an educational book called, "The Pictorial Method of Teaching the First Steps in Arithmetic Advanced Kindergarten", published in 1907, which was used in Tasmanian schools.

Sometime during the 1960's Henry's 80 year old nephew wrote to Rix's grandson about his uncle.


In (1873) eighteen seventy three H. F Rix became Mathematical master & subsequently also Sports master at Wesley college sic he was I may add according to reports I received from various ones when at Wesley some (17) seventeen years later the main power or force behind the movement of obtaining and forming & equipping the sports oval in front of Wesley College facing St. Kilda Road. I cannot write as the teachers, masters & scholars have written of Harry Rix, BA. for such records I have never read their equal but I just humbly quote of personal incidents & knowledge which may hold some personal interest I met some of the old boys of Wesley who studied under him the teachers that taught in his time such as Mr Goldstraw whom I know well Adams who knew him and all with one voice & one accord as it were would proclaim from the highest (difficult to decipher) authority Harry Rix & his work to be of the greatest importance to the Educational facilities & its scholars of that day. Also to all he was an idol of power and affection by his contemporaries – his pupils the latter would greet him with cheers on the Monday morning after his exploits on the football field as he played for Carlton first team And so a great man a fine teacher respected – beloved by all – feel I must add that when they acquired the property for the Oval at Wesley he spent the whole of his vacation in cutting & clearing scrub which was well in possession sic of the now beautiful Sports Ground. There was nothing too big nothing too hard nothing to sic mean or small or insignificant for Henry Finch Rix to take in hand & go “full steam ahead” –

Named after Henry Finch Rix Inspector of Schools, for "best all round achievement for a boy or girl at Melbourne High." The medal was awarded from 1907 - 1927.

On high let the Southern flag -

Ring out the shout when on each crag

The Union Flag is sighted.

Join hand in hand from shore to shore,

From heart to heart for evermore,

Let one life blood be surging.


One people we, strong-souled and free,

A brotherhood of liberty

In honour's cause untiring.

Then man to man we'll ever stand,

No feuds our soul shall sever; 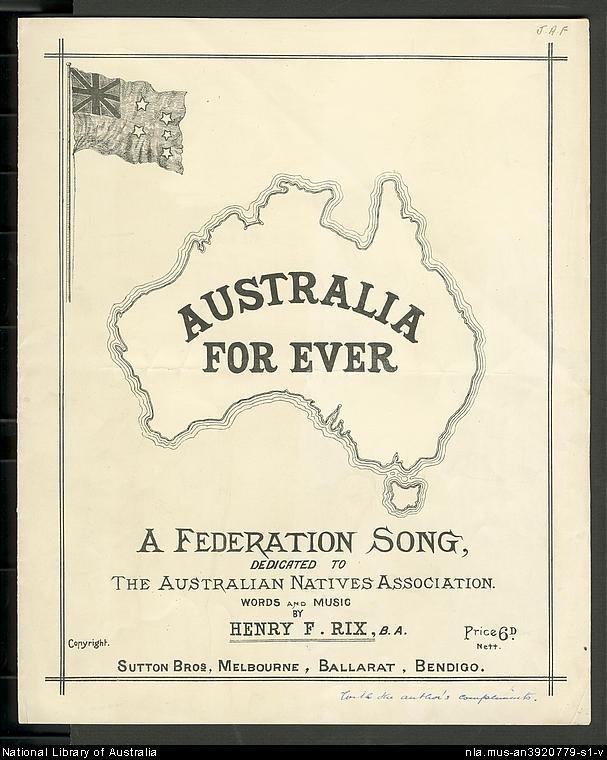 Henry's daughter Emily Hilda Rix (01 Sept.1884 Ballarat - 03 Aug. 1961 Delegate) was an artist who held solo exhibitions in Europe and Australia.
Hilda went to France in 1907, not long after her father's death, with her mother (Elizabeth) and sister (Elsie), she studied in Paris and then lived in the Northern French coastal village of Etaples. But she had to flee, leaving behind her paintings in 1914 when the war began and Germany swiftly invaded Belgium and northern France.
Australian, Major George Nicholas (a high school teacher, studying Law in civilian life.) was later stationed in the village, in the very house that Hilda had lived in. He saw and admired her abandoned paintings, so on leave in England he tracked her down in September 1916.
October 04 1916, the couple attended Buckingham Palace where George was presented with his DSO by the King, for his skill in handling his battalion in the attack on Pozieres.
'(Pozieres) Great dash & initiative in capturing machine-gun single-handed.'
Second citation reads: '(Pozieres) For ability and skill in handling his Coy, for excellent consolidation work, and gallant reconnaissances.'
Recommendation date: 6 August 1916
Mention in Despatches
(UNSW Canberra - AIF Project)
After a whirlwind romance, three days later on October 07 in London, Hilda married Major George Matson Nicholas DSO from Trafalgar Victoria.
On the following Monday George returned to active service in France.
Soon after George was killed in action leading his 24th Australian Infantry Battalion at Flers (Somme) on November 14 1916.
Sadly, The Argus December 02 1916 (p3), under Family Notices, announced the marriage in London of Hilda Rix & George Nicholas, and then in the very next column under Died on Active Service - the death of Hilda's husband Major George Nicholas!
Tragically, Hilda had not only lost a husband, her sister Elsie had died in 1914, and her mother Elizabeth in 1916. Both had succumbed to typhoid while in England. Also two of her brothers-in-law also died during the war. Not surprisingly she had virtually given up painting and returned home to Melbourne in May 1918. Soon after arriving in her home land she took to work and had an exhibition of some 100 works of sketches and paintings.
In 1922 Hilda competed with other fellow artists, John Longstaff and George Lambert, to paint a fresco depicting the War in the Melbourne Public Library.
In 1928 aged 44 she married an ex serviceman, Edgar Wright, who too had been stationed in the Flers (Somme) area. She lived and painted at the Wright's property 'Knockalong' near Delegate on the Vic/NSW border, Monaro region.
Edgar understood and supported Hilda's reasons for her keeping the name Rix Nicholas, which was unusual for those times.
Her paintings are in several Australian galleries including the National Gallery of Australia, National Gallery of Victoria, and the Musee National du Luxembourg in Paris.
Nine of her WW1 sketches have been purchased by the Australian War Memorial in Canberra.
1918 Herald article about Hilda Rix;
http://nla.gov.au/nla.news-article242513427

Henry Rix married Elizabeth Sutton of Ballarat in 1876.
Elizabeth was an accomplished singer and artist, having a studio in Flinders Street Melbourne and she also assisted in the family's burgeoning music business in Ballarat.
Elizabeth's brother Henry Sutton was an inventor and held a few patents.
Self taught, from reading all the scientific books at the Ballarat Mechanic's Institute, Henry went on to develop interests in mining (developed pumps), aviation (built a minature clockwork prototype helicopter which flew), radio (long range tranmission, and the world's first portable radio), his 1885 theory of the transmission of radio waves carrying images, what he called telefane. He actually transmitted the 1885 Melbourne Cup via the telegraph system to Ballarat! (television) Almost three years before the inventor of television, John Logie Baird was born. He produced light bulbs (developed independently, the incandescent light bulb just 16 days after Edison), internal combustion engine - carburettors, telephones, the process of printing photographs in newspapers, etc.
All these inventions and improvements were developed before, or just after the recognised invention.
However due to the tyranny of distance, working in isolation, Henry did not receive the recognition he deserved.
Like fellow Australian aviation pioneer Lawrence Hargrave, Henry applied for very few patents, and he also believed that all people should benefit from his work.
Others expanded on his ideas and reaped the rewards.
His family's interest in music in Ballarat eventually led to the music publishing company Sutton Bros. in Melbourne, Ballarat, and Bendigo.
Interestingly, Henry Rix's "Australia Forever" was published by Sutton Bros. Melbourne.


Further information and a list of Henry Suttons achievements can be found at https://federation.edu.au/about-us/our-university/history/geoffrey-blainey-research-centre/honour-roll/s/henry-sutton
and www.heritageaustralia.com.au - Articles - Summer Edition 2005 - "Henry Sutton - The Eureka Man."