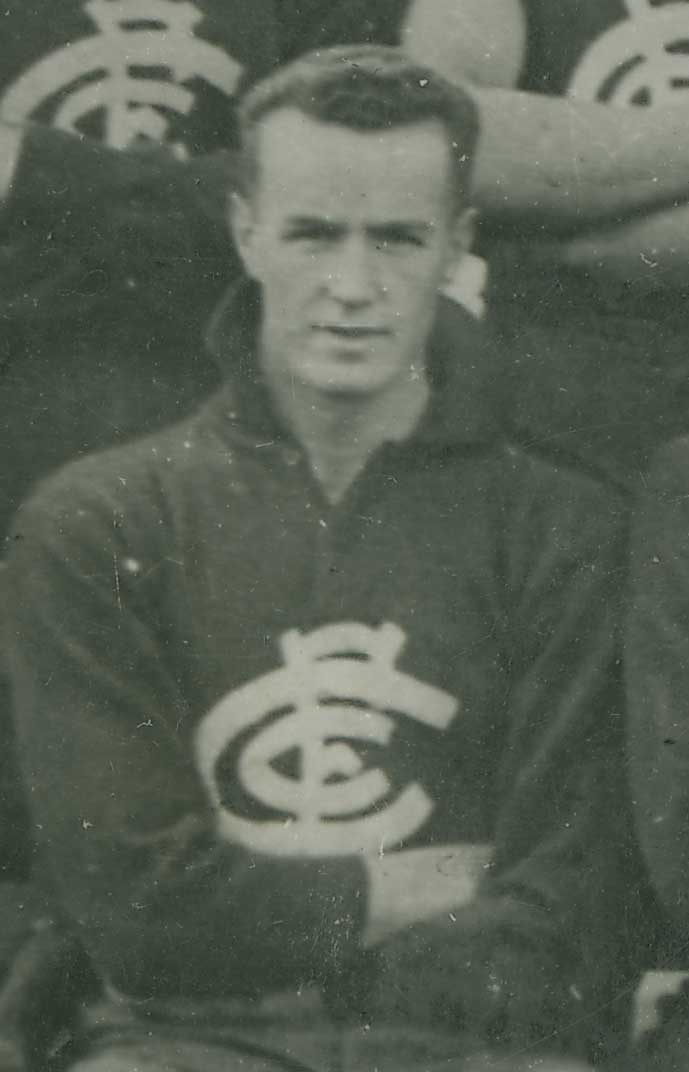 
Renowned for his pace and his prodigious left-foot drop-kicks, Joe Kelly was a flamboyant wingman whose career encompassed the era from 1914 to 1938 - the longest-ever stretch between flags in Carlton’s history. An early exponent of ‘run and carry’ football, Kelly loved to take opponents on; often dashing downfield in an exhilarating solo run. He represented Victoria on three occasions, and played finals football in six of his nine seasons at Princes Park.

Kelly grew up in East Brunswick. He played his early football with Thornbury CYMS, and later, VAFA club Old Xaverians – where he caught the eye of Carlton’s scouts. He joined the Blues in 1926, and was selected for his first senior game in the opening round of that year, against Hawthorn at Glenferrie Oval.

Also making his debut that day was a man destined for immortality at Princes Park – Harry ‘Soapy’ Vallence – embarking on a career that would eventually see him recognised as one of the game’s all-time great full-forwards. Carlton beat the Mayblooms by 20 points that afternoon, and it is probable that ‘Soapy’ was given a preview of what was to come whenever Joe Kelly took the ball on centre wing, and began sending his raking drop-kicks to the teeth of Carlton’s goal.

By 1928, Kelly’s ball-getting ability, and Vallence’s deadly finishing helped lift the Blues into our first finals series in five years. But in a portent of things to come, Richmond proved too steady in the last quarter of the first Semi Final, and beat the Blues by one straight kick. In 1929, Kelly’s impact on the game brought him selection in the VFL representative squad for that year’s clash with WA in Perth - an honour that was to be repeated in 1931 and 1934. Later that same year, Carlton made it through to the Preliminary Final, only to run into their Richmond nemesis again. In a spiteful and controversial affair, Carlton’s tough little rover Tommy Downs was reported for kicking, and suspended for 19 matches.

In 1931, Vallence and Kelly combined to kick a whopping 12 goals in the Semi-Final against Collingwood. Kelly controlled his wing and was a major source of supply for Soapy, who was superb up front for Carlton and steered through 11 majors. The Blues thrashed the Magpies by 75 points in a dominant performance, only to fall to Geelong by just 6 points in the following week’s Preliminary Final.

Eventually, Joe Kelly’s one and only opportunity for Premiership glory came in 1932, when Carlton finished the regular season as minor Premiers. However, Richmond continued their dominance over Carlton in the second Semi-Final, and forced the Blues into a dangerous Preliminary Final clash against Collingwood. But although Kelly was hit hard early and forced from the field, ‘Soapy’ repeated his heroics of the previous year and banged through another 11 goals as Carlton slaughtered the ‘Pies by 75 points.

Joe recovered in time to hold his place in a confident Carlton side for a ’32 Grand Final that drew a record crowd to the MCG on a fine spring day. The multitude that packed into the ground was treated to a titanic clash between two committed teams, in one the era’s great Premiership deciders. The Tigers led at the first two changes, before the Blues came back hard in the third quarter. With less than five minutes remaining in the match, Carlton were in front by four points when a fumbled mark in Carlton’s goal square gave the Tigers a gift-wrapped six-pointer. Inspired, Richmond rushed forward twice more – scoring a goal and a behind - to run out 9-point winners and break every Bluebagger’s heart. This was Richmond’s fifth successive finals victory over Carlton, in a sequence stretching back to 1927.

After being tormented so often by the Tigers throughout his career at Princes Park, it was ironic that Joe Kelly was destined to meet them one last time in his swansong outing for the Blues, in round 14, 1934. On their way to another flag, Richmond came out on top again – although a plucky Carlton team pushed them all the way before going down by 13 points. Joe and Soapy played together for the final time on the hallowed turf of Princes Park that afternoon, when Joe hung up the number 7 guernsey that he had worn with such distinction in 137 matches.

In 1935 Joe Kelly took up the position of the non-playing coach of VAFA team South Caulfield in C section amateurs. In 1936, Kelly coached the Footscray Reserves team to a premiership, and the following year he was appointed senior coach of the Bulldogs when Collingwood legend Syd Coventry abruptly resigned after round 4. By 1938, Joe had earned himself a niche in Western Oval history by taking the Bulldogs into the VFL finals for the very first time. Three years later - in the midst of World War II - he moved on to struggling South Melbourne, and coached the Swans all the way to the 1942 Preliminary Final. Rounding off his career, he was in charge of the Australian Amateurs during an exhibition match at the Melbourne Olympic Games in 1956.

Remembered as one of the most accomplished of Carlton’s sons never to have played in a Premiership team, 91 year-old Joe Kelly passed away on June 17, 1998.