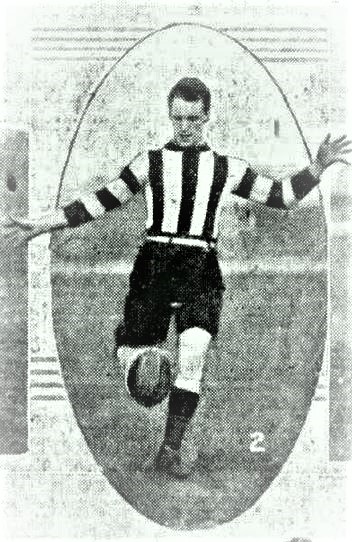 By the time 19 year-old Lindsay David ‘Les’ Husband volunteered to fight for his king and country in World War 1, he was already well-trained in military matters. Two years with the school cadet battalion at Trinity Grammar School, and another two with his local militia unit based in Box Hill, had given the fair-haired youngster solid grounding. So in August 1918, after arranging war-service leave from his position as a bank clerk, he reported for duty at Broadmeadows army camp.

But barely three months later, the war ended with the signing of an armistice. Those volunteers who had not completed basic training were immediately discharged, and by Christmas Eve of that year, Les was back at home with his family. From then on, his energies were devoted to football – at first with Box Hill, and later with Collingwood District, where he earned admirers as an honest and capable follower-defender. A number of VFL clubs showed interest in him, but were apparently discouraged by his slender build.

Eventually, Carlton’s captain-coach Horrie Clover convinced the Blues to take a punt on Husband, and in 1923 he played his first senior match for the Blues (against Geelong, in round 9) five days before his 25th birthday. Clover assigned Les to the ruck (in support of Rupe Hiskins and Stewart McLatchie) for his first three matches, before a switch to half-back late in the season made him more comfortable and more effective. His debut season produced nine games and two goals, so he was encouraged to continue.

But five weeks into the 1924 season, Les lost form, and was omitted for eight games straight. He returned to the ruck for a welcome win over Melbourne in round 13, then was asked to play at full-forward against Collingwood the following week. Carlton trailed just about all day in that game at Princes Park, until the Magpies pulled away and ran out easy winners. Husband didn’t trouble the scorers, and that proved to be the last of his 14 appearances for Carlton in guernsey number 31.