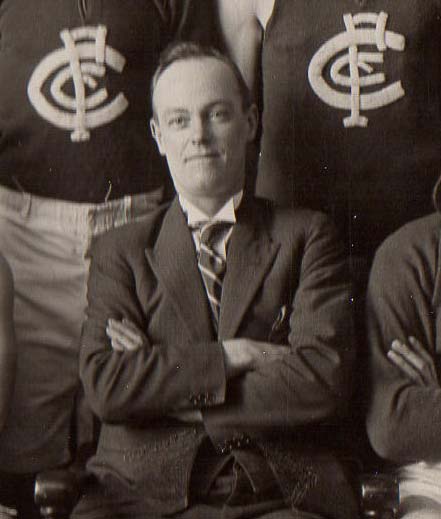 Patrick Joseph Cain
Age 52
After the funeral, his remains were buried at the Melbourne General Cemetery on September 07.

Mr. P. J. Cain, manager of the Carlton team, has only recently assumed the office of secretary of the club. He suceeded Horry Clover in that position.
Mr. Cain led the reform party three years ago, which resulted in the present committee taking office. He also bought into existence the present flat rate of £3/10/ for each player taking part in a match. Mr. Cain has been a member of the Carlton Club for 20 years, and a committeeman for four years. He is a member of the Victorian Football League permit and umpire committee, and is one of the best known figures in Victorian League circles. (The Arrow, Sydney, p13)

1928 January 28
The Argus (p18) reported on the upcoming Carlton AGM to be held Feburary 15.
At the AGM special mention will be made of the work done by Carlton secretary P. J. Cain;
"Much of the success of the club is due to his efforts and untiring energy. His many arduous duties have been carried out in his usual thorough and painstaking manner. He is deserving of your best thanks, and we trust his services will be long retained by the club."

"To test the old question whether League teams should be reduced from 18 to 16 players, the Victorian Football League decided to ask all clubs to set aside one practice Saturday this season for a match between two teams of 16.
The matter was re-introduced by Mr. P. J. Cain, late secretary of Carlton. He suggested that teams be reduced to 15, losing a follower, a back and a forward for the following reasons:-
To make the game more spectacular.
To save in maintence of teams.
To assist in evening up club teams.
To lessen competition for prospective players.
To reduce the risk of injury.
To make it easier for weaker centres to get teams.
Messrs. R. J. Rush (Collingwood) and F. G. Reid (Essendon) supported the reduction proposal.
Mr. Rush said Collingwood had already tried the 16-team and had supported the idea for years.
It was intimated that early in the season proper that the matter would be discussed in the light of the trials."
The Advocate (Burnie) March 02 1935 (p4)