The Tigers would crush the Blues in the opening round of 1978 in an ominous sign of the power they had in this era. Carlton fans of history would well know that that era only had a few more years to go before a seemingly neverending slide after their 1980 Premiership, but there should be no doubt at all that the Tigers were a massive team in the 1970's.

The Blues, despite the loss, were building their own next great team and would welcome Peter McConville and Warren 'Wow' Jones who would each have their own role to play in the next 5 years, a Blue era of 3 Premierships in 1979, 1981 and 1982.


Amazing how quickly the scribes write off teams. A few years back North Melbourne were thrashed by South Melbourne in the opening round and went on to win the flag. Carlton suffered one of these dreadful hidings that comes the way of all sides at some stage or other. I dont believe for a moment that Carlton is as bad as Richmond made them look. Remember that the matchwinners in that game were Alan Edwards and David Cloke. Between them they kicked 14 goals - 84 points. More than the margin they won by. The players they thrashed were Geoff Southby and Bruce Doull. For starters, that's not the right for those two great players. Bring back Peter Jones, convince David McKay that chasing an opponent is just as important as going for sky-scraping marks, and let stinging tongues of George Harris and Ian Stewart push in another couple of players harder for the ball and you'll see Carlton as a force to be reckoned with. - Brian Hansen Inside Football.


Carlton are hitting the panic button early this year. It looks like players being switched everywhere this week, and no doubt we'll see some players in positions where they originally made their names. All a bit confusing. They've had all those practice matches to establish the best positions for their players. Age takes its toll, and some are getting long in the tooth and their position on the field has been adjusted accordingly. Carlton might find that they have to make some other changes along the lines that Footscray did last year. Like dropping the old and bringing in the new! - Gary Dempsey Inside Football.


Big-money supporters and some Pressman had their noses out of joint when Ian Stewart and George Harris locked them out after the game. I figure the Blues made a blue in an area of tact. In football policy I believe they did the right thing. After a 77 point defeat and when you have an ego of the collective size of Stewart and George you don't want anybody but the players hearing the exchanges. No doubt the supporters wanted to get in and console the players. Harris and Stewart didn't want the sympathy. In fact they obviously wanted them to suffer - and why not after their poor performance? - Gary Dempsey Inside Football 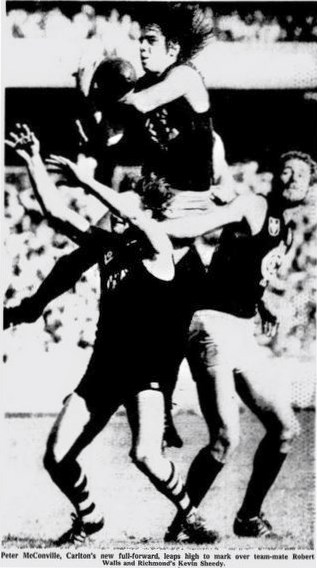