Was it one of those traditionally-comfortable 5-goal wins against weaker opposition, or a case of playing for a half and then coasting? On a cold, wet Saturday afternoon under the closed roof at Docklands, Carlton’s victory over the Brisbane Lions had elements of both, as the Blues moved into positive territory at 6 wins and 5 losses for the first time in three years.

On selection night, Carlton captain Marc Murphy and lively small forward Liam Sumner were both omitted because of injury. Casey Byrne and Nick Graham came back in, ahead of a home-town clash against one the competitions strugglers. The Lions had won only one game in 2016, to be anchored at the foot of the competition ladder. However, they had beaten ladder-leaders North Melbourne earlier in the year and were usually competitive against the Blues - except this time. 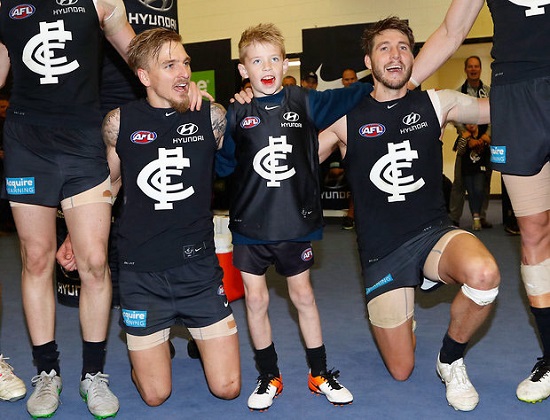 An opening 10-minute arm-wrestle played almost exclusively in the Blues’ defensive half suggested an even struggle, before consecutive goals to Tuohy, Cripps, Casboult and Armfield opened up a commanding lead. Meanwhile in defence, Jake Weitering was warming up for a Best On Ground performance, ably supported by Simon White and Sam Rowe. At quarter time the Lions were goalless, and already trailing by 24 points.

Carlton’s second quarter was impressive, with strong run through the middle and team defence standing out. Jed Lamb booted the first two goals of the term, before Brisbane first-gamer Jarrad Jansen took a good mark and kicked truly for the Lions’ first major. Carlton immediately replied through Dennis Armfield, after Andrew Walker had crashed through Lion Allen Christensen and sent the former Cat to hospital with a broken collarbone. The Blues were 39 points up at the long break, but there were real concerns for Matthew Kreuzer, who had suffered concussion and was vomiting in the rooms. “Krooz” didn’t return to the field after half-time, so Rowe and Daniel Gorringe shared the ruck duties throughout the second half.

Those changes eased some of the pressure on Brisbane and they were more competitive, kicking 4.0 to Carlton’s 4.4 in the third quarter, and 4.3 to 4.2 in the last, without ever looking like overhauling Carlton’s comfortable lead of 38 points on the final siren. The impressive part of this victory was Carlton’s composure. Every time the Lions surged, the Blues either held them off, or struck back hard to re-assert their authority. Among Carlton's best were Weitering (24 disposals, 14 marks) Sam Kerridge (30 disposals, 16 marks) Ed Curnow (28 disposals, 12 tackles) Kade Simpson (24 disposals, 9 marks) and Pat Cripps (26 disposals, 6 clearances, 2 goals).

Guernsey Records : Dennis Armfield overtook Ollie Grieve's record of 130 games in guernsey no. 27
Losing Streaks (1): This win ended a run of three losses to the lowly Lions
Interesting Fact: (2) This would be Carlton's last win until Round 22
Interesting Fact: (3) This would be the last time for over 3 years in which we would kick over 100 points in a game, and didn't the press make a big deal about it! The Blues would in fact play another 59 games without kicking over 100 points, the drought would finally be broken in Round 5, 2019 vs Western Bulldogs.