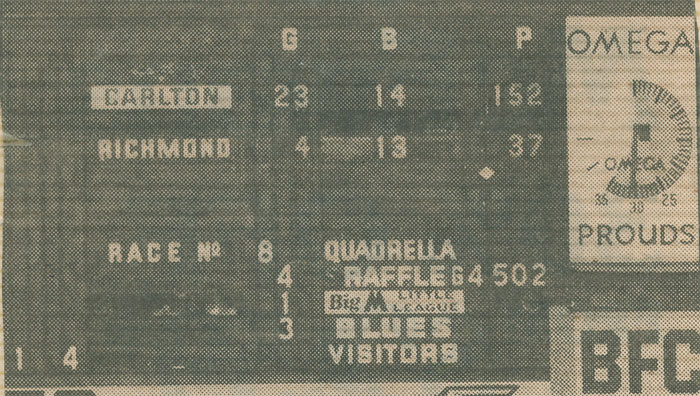 In a season as tenuous as this one, any match against our traditional rivals (Collingwood, Essendon and Richmond) had more than the usual edge, because all four clubs were definite finals contenders. So the glee that greeted the final siren after this magnificent win by the old Dark Navy Blues was even more intense than usual.

The game was won by the little blokes - Carlton's mosquito fleet of Ashman, Buckley, Marcou and Murphy - with the assistance of a dominant ruck. Ashman and Murphy kicked 11 goals between them, and Wayne Johnston ruled the middle of Princes Park as Carlton smashed the hapless Tigers by 115 points.

This welcome result boosted Carlton's percentage, and shored up our third position on the ladder. Essendon and Hawthorn were still two wins clear at the top, with the Blues third, four points ahead of Collingwood and the late-improving Footscray.

Carlton's Jim Buckley scored three votes for his sensational efforts against Richmond. The Blues had many attacking opportunities which started as a result of Buckley's endeavour, sending the ball deep into their forward line as he burst through the centre. Buckley was well supported by other fellow smallmen in Rod Ashman and Fraser Murphy. - Inside Football Player of the Year.

This season, 1984, is the Richmond Football Club's Centenary Year. Well, a diehard Richmond supporter I know, reckons it took the Tigers those 100 years to perfect an inept display like the one they turned in against Carlton at Princes Park on Saturday. A 115 point flogging by Richmond's arch-rival, shattered this fan as it did all other yellow and black fanatics. He hopes it's at least another 100 years before the Tigers put in another shocker like that. - Tony Greenberg Inside Football.


Fraser Murphy - Pocket Hercules
Carlton seems to churn out talented small men with monotonous regularity. The key to the Blues success in recent years has been the brilliance of players such as Rod Ashman, Jim Buckley, Ken Sheldon and Alex Marcou. And now you can add another little bloke to the list. Former VFA star, Fraser Murphy showed in Saturday's match against us, just what he is capable of. Fraser, who was recruited from Geelong West this year, started off the match on the interchange bench, but came on early in the first quarter when Alex Marcou left the field injured. He certainly made the most of his opportunity and proceeded to tear us apart with his blistering pace and excellent skills. For a player lacking in inches, Fraser Murphy has considerable strength. Kevin Bartlett, describing the game on 3UZ, called him a pocket Hercules because of his strong roving style. Fraser finished the game with the impressive statistics of 15 kicks, six marks, eight handpasses and five inspiring goals. The longer the match went, the better he went. Carlton supporters believe, in time he will emulate the feats of his illustrious roving partners - Rod Ashman, Jim Buckley, Ken Sheldon and Alex Marcou. On Saturday's performance, few would dispute that. - Michael Roach Inside Football.

Carlton undoubtedly is going to throw out a big challenge for this year's flag if Saturday's form is indication. Admittedly, we didn't place the Blues under much pressure but they looked really good. As I mentioned previously, they have a superb "mosquito fleet" and are now well off for big men with the likes of Warren Jones, Justin Madden and Bruce Reid. At the moment, Hawthorn again appears the team to beat with Essendon its main danger. But, after watching the Blues destroy us, I definitely wouldn't rule out their chances of landing another premiership. - Michael Roach Inside Football.

In what was expected to be a tough clash between traditional rivals at Princes Park, Carlton thrashed the Tigers by 115 points. Richmond could only manage two goals in each half as the Blues small brigade led them to their easiest win of the year. Carlton mighty midgets - led by Buckley, Ashman and Murphy - blasted the Tiger defence and shared 13 goals between them. - Football Record.

Carlton consolidated third place in no uncertain fashion with a 100 per cent performance. Rod Ashman 6 goals, Jim Buckley and Fraser Murphy 5 goals apiece mesmerised Richmond which couldn't do a thing right. The Blues margins at the end of each quarter were 27, 53, 62, and 115 points respectively. For Carlton, it was its best ever win over Richmond; for Richmond it was its worst defeat for 24 years, and the first time since 1964 that a 100 point hiding had been handed out. - Football Record.