While it wasn’t a particularly skilful or high-scoring contest, this match will be long remembered as Brendon Bolton’s first win as senior coach of the Blues. Playing relentless old-style football, Carlton upset the 2015 minor premiers on their home turf at Subiaco Oval and hauled themselves off the bottom of the AFL ladder. It was a gutsy effort built on bloody-minded persistence, with the clubs’ leadership group setting the standard. 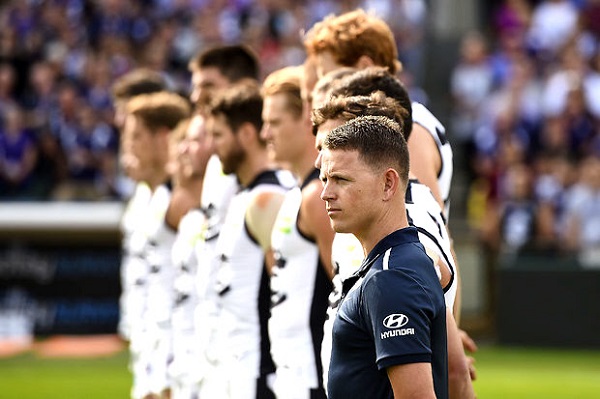 Prior to this weekend, Fremantle and Carlton were sitting second-last and last respectively on the ladder without a win between them, so the stakes in this game were huge - especially for the home side. Carlton made one change for the trip west, omitting midfielder Nick Graham for tall forward Liam Jones. Captain Marc Murphy had reportedly recovered from the severe head knock he suffered during the previous week’s loss to the Western Bulldogs, but he was wearing a protective helmet when he led his team out onto the ground in front of a good crowd of almost 35,000.

Both teams were determined and anxious from the start, crowding the play and throwing themselves into the contest. The nervousness was typified by Dockers skipper Matthew Pavlich, who ran into an open goal early on and hit the post from three metres out. It took 19 minutes of scrambly play for Freo to kick the opening goal of the game, quickly answered by majors to Dale Thomas and Jed Lamb. A six-pointer from Dockers star Nat Fyfe tied the scores right quarter-time, and the game was already looking like an arm wrestle.

The second quarter was more of the same, with rugby-style scrums crabbing their way around the ground as both teams strove to assert their authority. Murphy, Pat Cripps and running defender Kade Simpson were outstanding in this term, as Carlton added 2.4 (with goals to Matthew Wright and Charlie Curnow) to lead by one point at the long break. Meanwhile, Docker stars Fyfe and Ballantyne had suffered leg injuries, and Fyfe was to take no further part in the game. Along with Matthew Wright, Dale Thomas had been lively all through up forward for Carlton. Daisy kicked his second major from a goal-square spillage soon after the third quarter began, followed by the goal of the match when he curled one through from the left forward pocket. The Dockers would not be shaken off however, and at three-quarter time they were still ahead by two points.

A drama-filled last term began with Carlton on top early, although once again erratic shooting for goal was costly. Misses by Levi Casboult and Liam Jones tied the scores, then Sam Kerridge kicked long and Jones plucked a strong mark 30 metres out. Liam’s kick split the posts to put the Blues a goal in front, only for the Dockers to rally once more. With six minutes to go, Freo had clawed their way back to a 2-point lead before Wright fired a handpass to Murphy and Carlton’s captain snapped brilliantly from 20 metres. When Bryce Gibbs added another with a long set-shot from the 50-metre arc Carlton had some breathing space, until the Dockers replied through their ruckman Griffin.

Then, well into time-on and with the game still in the balance, Docker Lachie Neal gathered the ball in Fremantle’s right back-pocket and decided to switch the play. To his horror, his pass across the ground was intercepted by Jones, who calmly took the shot and goaled to put the Blues 10 points up. Right on the final siren the Dockers launched one last attack and their full-forward Mayne brought up full points, but the Blues were home and already celebrating.

This was a crucial victory for Carlton in so many ways, particularly in building confidence and self-belief in the side as whole. Team leaders Murphy, Simpson, Cripps, Ed Curnow and Gibbs were outstanding, as were defenders Sam Docherty and Ciaran Byrne. Sam Rowe had the better of one of the games’ top forwards in Matthew Pavlich, Dale Thomas played his best game yet for the Blues, and Liam Jones’ two last-quarter goals won the match for his team.

Recovering from a stroke, Sir Robert Menzies watches his beloved Blues from a specially-constructed ramp - 1972.jpg