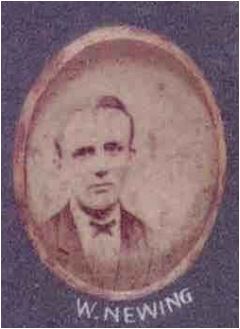 The term "Little Wonder" is probably not because he was small, which most likely he was, but because of his young age when he first played for Carlton. Billy Newing would have been just 12-14 years of age!
However, back then most boys started full time work at around this age so working with men would have been common place.


1869 May 22
First mentioned in The Carlton Story by Hugh Buggy and Harry Bell as playing in the opening match of the season against Geelong on the Queen's Birthday holiday.
Bill kicked a goal after twenty minutes of play, he would have been about 14 years of age.

1873 Kicked the only goal of the game with almost the last kick of the day against Melbourne in the third meeting at Royal Park.
(The Carlton Story, H.Buggy and H.Bell p30)

1874 The "little wonder".
His marking and kicking much admired in their second encounter in 1874.
(Centenary Souvenir of Carlton Football Club p10)

1875 The Argus has named Newing in a Carlton First Twenty side to play a Carlton 25 in a scratch match at Royal Park on Saturday 8th. May.

1876 The little wonder as of old, and a capital follower, never tires, good kick either foot, and a skillful dodger. (not played often)
(The Footballer. 1876. p34)


Around the boundaries hundreds of spectators stand,

The scene presented to us is strikingly beautiful and grand,

Our men are tough as trees with deeply earthed roots

And the ladies quite mutually pronounced them really

“Killing” in their new knickerbockers suits;

With determined eye and cap pulled on tight,

With body and soul eager for the fight.

Simultaneously every player for the ball has started,

While each man his adversary is tripping and shoving

One has leapt up and caught it,

Though all make frantic efforts the ball can’t be got

And the spectators surmise the game is getting hot.

W. Newing.
Inter-colonial match Saturday 23 June 1877
Waratah a Sydney club ranking about third in strength, organised the inter colonial match. Founded a mere four years previously it normally played in the Inner Domain and on Moore Park. It had a strong following of inner Sydney people and had the added advantage of a former Carlton champion, W. Newing among it's best players and perhaps for that reason it boldly invited the champion Carlton team to Sydney.

(Game Of Our Own, Geoffrey Blainey p85.)

1894 The Argus reported Newing's sudden death at his residence The Haymarket Hotel, corner Elizabeth and Grattan streets Melbourne in the early hours of Tuesday 24th April.

1894 April 28
Wm. Newing, a veteran in football circles and the ex champion of the Carlton (Vic) Club, was found dead in his bed by his wife on Tuesday morning. He was 39 years old and kept a hotel in Melbourne.
(Maitland Weekly Mercury (NSW) p14)

"Billy Newing, an old-time footballer, famous as a wing player in the Carlton team, was found dead in his bed at a hotel this morning. It is supposed to be a case of heart disease."
The Barrier Miner Broken Hill Wednesday 25 April (p1)

On the news of Billy's death George F. Bowen wrote in Melbourne Punch May 10 (p16) that he recalled taking Newing to Geelong with the team after reassuring Billy's mother he would look after him. Bowen said that was 27 years ago. If correct that would make the year 1867 with Billy being around 12 years of age!
Carlton did play Geelong on the old Argyle Street ground in 1867.
"Origins of Australian Football" have him at Carlton in 1868, even so he would have been just 13 or 14 years old. No wonder he was called "The Little Wonder."

The Australasian's "Markwell" commenting on the recent death of Billy Newing;
"With deep regret I have to record the sudden and unexpected death on Wednesday last of W. Newing, who, in the seventies, was one of the most accomplished players in the Carlton team.
Many a time have I seen and admired his play, and as I write one instance wherein his pace and adriotness were invaluable to his team comes up unbidden to my recollection.
It was in a match against Melbourne, on the top of the hill in Royal-park, before the days of enclosed grounds; and the Reds, with a particularly strong twenty in the field, had had a deal the better of the encounter so far as chances were considered, but had been unable to pot a goal, when, almost on the stroke of time, "Billy" secured the ball on the centre wing, and with a characteristic dash, aided by consummate judgment and dodging, carried it to a few yards of the posts, between which he drove it with the accuracy of a Thurgood and won the game for his side.
His sterling qualities added greatly to his popularity as a footballer, and enabled him to retain to the end the friendship and goodwill of one and all of his early associates."