View Articles
(3991 bytes)
KEVIN O’Brien, the second of three generations of family to represent the Carlton Football Club, has died in Queensland at the age of 88.

Originally hailing from Newport in Melbourne’s inner south-west, O’Brien was an outstanding junior tennis player and accomplished student at CBC Parade East Melbourne, who won a clearance to Carlton despite being residentially tied to South Melbourne.

In pursuing his career at Princes Park, he took the blue baton from his uncle, the Carlton captain Paddy O’Brien, who represented the club with distinction in its back-to-back Premiership teams of 1914 and ’15.

Fifty-five years later, he handed that baton to his nephew, the North Melbourne and Carlton full-back Mick Martyn, who rounded out his 300-game career at Princes Park in the No.10 once worn by Paddy.

A member of Carlton’s 1953 Reserve grade Premiership team under coach ‘Mick’ Price’s watch, O’Brien got his first senior call-up for the 3rd round match with Richmond at Punt Road in May ’54.

The following year he was granted leave of absence by the club, and didn’t resume until the 13th round of ’56 when Carlton met Melbourne at the MCG.

In his final senior appearance – Round 12, 1957 versus Hawthorn at Glenferrie Oval - the 25 year-old O’Brien contributed to the visitors’ nine-point win, with Ken Hands leading the way as captain and the young J. Nicholls still finding his feet in a back pocket.

Martyn recently paid tribute to his Uncle Kevin (the younger brother of his mother Mary) with whom he had an involvement through the South Kingsville-based family business Able Industries Engineering.

“Uncle Kevin, as a sportsman, was a bit of an all-rounder. He was good at all the sports he played,” Martyn said.

“It’s quite unique in a way that there were three generations at Carlton. I was quite proud to follow Kevin and wear Paddy’s old No.10 from the early 1900s.

“Kevin was also going around when my father ‘Skinny’ (Bryan Martyn) played at North, although they never played against each other.”

That said, both Kevin and Bryan did cross paths at reserve grade level, in interesting circumstances to say the least.

“Kevin and Bryan first met when Kevin’s sister Mary introduced him to Bryan after they’d played against each other in the reserves earlier that day,” Martyn said.

“They both broke each other’s noses in the ruck as they didn’t know each other at that point in time. Needless to say It was an awkward first introduction.”

Martyn recalled that he had much to do with his uncle beyond the football field, as Kevin was a director of the family business despite living in the south-eastern Brisbane suburb of Logan City for many years.

“He often used to fly down from Queensland on business, so we’d socialise quite regularly. He was like Sam Kekovich in that he used to trot out big words, and the other thing about him was that he had that strong handshake,” Martyn said. 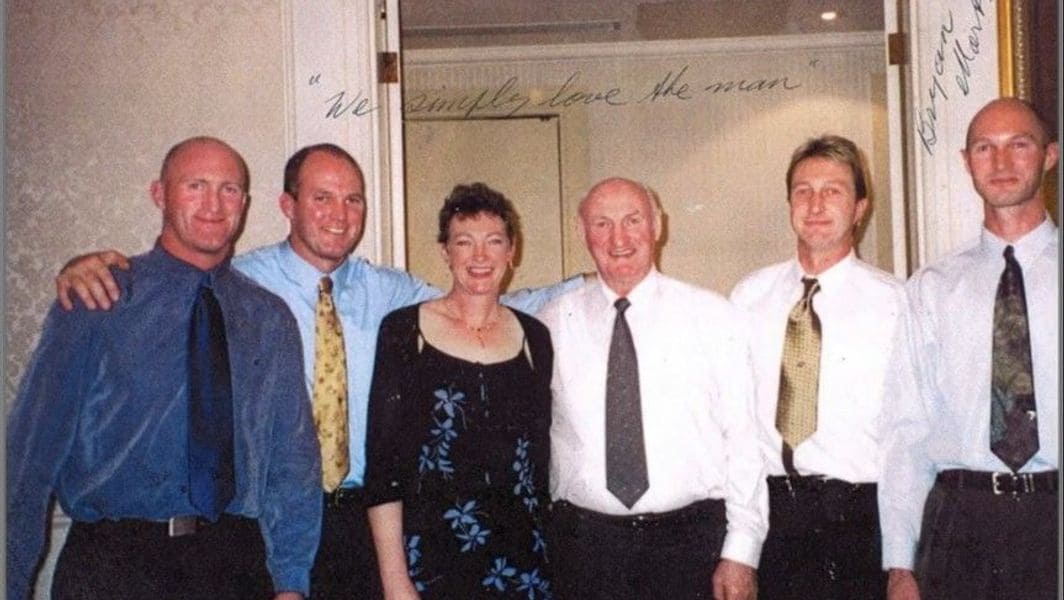 The Martyn siblings, pictured with their uncle Kevin O’Brien in Melbourne, on the occasion of Kevin’s 70th birthday in 2002 – from left to right Michael, Stephen, Rosemary, Kevin O’Brien, Peter and John. Caption penned across the top of the photograph reads: 'We simply love the man.'


“It’s fair to say he had a colourful life. He loved his loud shirts and his safari jackets, you’d notice him as soon as he walked into a room and he’d offer you words of wisdom straight up.

“He was an entrepreneur/advisor type who represented (Robert) Holmes à Court at one time. He could speak a number of languages and was always proud of the fact that he completed his PhD in philosophy, majoring in Theology. He also had an interest in horse training and dressage through his daughter Kylie.”

Kevin James O’Brien died on September 24 after a long illness. He is survived by his wife Sylvia, children Sean, Kylie, Edmond, Joan and Margaret, and his grandchildren, as well as his brother John.