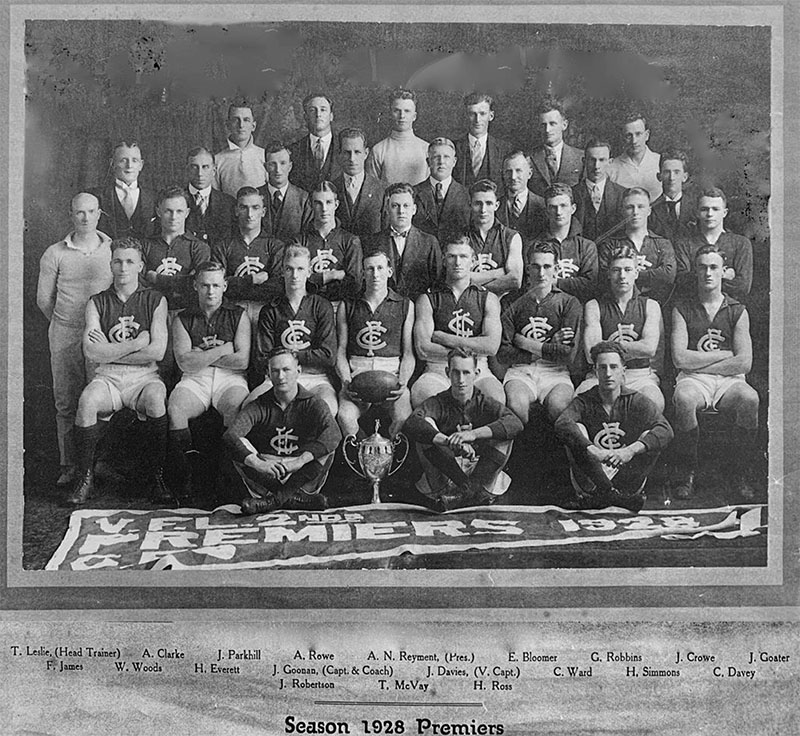 
In 1928, the Blues racked up their third Reserves Premiership in succession. Jimmy Goonan was the captain coach in all three of these premierships.

This game was played on the Thursday Showday holiday and Carlton won their third Reserve's Premiership in a row and won the Rosen Cup, which can be viewed in the Trophy Cabinet in the Gaming Room on the ground floor of the Carlton Social Club. Jimmy Goonan was the captain coach in all three of these premierships.
"The Rosen Cup was donated seven years ago by Mr. Rosen who is an ex president of the Second Eighteens League." (Geelong Advertiser August 24 1928)
The team that won the Cup three times had the right to retain the trophy. At the start of this years' Second Eighteen final series three clubs were in the running to retain the Cup, Geelong, Carlton and Collingwood.

"The Carlton players and officials will be entertained at a picnic at Somerville on Sunday to wind up the season. The committee is anxious that all who have promised to lend motor-cars, and any supporters who would care to do so, as well as the players and officials should meet at the Mutual Store at half-past 10 0'clock on Sunday morning."
(The Argus 28 September p17)

April 09
Before the practice match between the Carlton First 18 and the Reserves at Princes Park, there was a ceremony for 1927 Reserves Premiership.
Mrs Reyment the wife of the President of the Carlton Reserves unfurled the flag while the two teams lined up.
Approximately 5,000 supporters attended the match.

June 30
Carlton played Geelong at Corio Oval.
The Blues' team travelled to Geelong in a specially chartered rail motor.
They returned to Melbourne on the regular train departing at 9pm.
Crowd; 2,000 - the largest home crowd so far this year for the Geelong Reserves.
Geelong lead by 5 goals at the first break and were never challenged.
A letter to the Geelong Advertiser (July 02) commented on the the darknesss that fell towards the end of the match.
"The concluding stages of the game were played in a light that was about half daylight and half moonlight. It was impossible to see the ball a few yards away from the arena fence and players too were for the most part indistinguishable, particularly in any crowded play.
An experience probably unique in a football match occurred. On three occasions during the match a player marked the ball just as the bell rung for the end of the term. On each occasion the player had his kick and a goal was scored. Another feature about the three kicks was that none of them was within easy distance, and the players responsible - Mills (Geelong) and Ross and Clarke (Carlton) - might well be congratulated on their splendid kicks."
Carlton team;
Backs; Parkhill, McVay, Lewshing
Half backs; Bloomer, Kelleher, Simmons
Centres; Crowe, Rowe, Everett
Half forwards; Mortimer, Davey, Yoemans
Forwards; Henry, Clarke, Jones
Followers; Davies, Koop
Rover; Ross
Carlton lost by 54 points
Carl; 1.1 2.1 5.4 9.7.61
Geel; 5.8 6.14 11.18 16.19.115
Goals; Ross 3, Koop 2, Clarke 2, Davey, Yeomans
Best; Everett, Koop, Ross, Parkhill, Davie, Clarke, Rowe
Carlton first
Played 11, Won 9, Lost 2, For 1031, Against 702, 146.86%, Points 36