The Carlton Amateurs are affiliated with the Carlton Seconds.
(A feeder club to the Reserves.)
(Star March 29 p25)

"The committee reduced the training list by 25 to about 50 after the match, but the list will be further revised before the end of this week.

"T. Downs, who led one the teams in the first match of the day, later applied to the committee for an open clearance."
The Age reported the four League clubs are interested in recruiting Tommy Downs.
He has not given any reasons for leaving, but it seems that he realises the club has plenty of good small men, and he felt that he may be keeping a younger player out of the team.

The Following Had Been Announced For The Seconds


Payments To Players - Special Fees for Seconds at Carlton

"In these days when some of the League club committee are at their wits' end to pay even £1 ($2) per match to their senior players, it is interesting to find the Carlton senior committee agreeing to pay players of the Carlton seconds 10/ ($1) a match, with renumeration for the emergencies.
In addition the senior committee last night decided that the emergencies named for the second eighteen match should be paid 5/ (50c) each. Any senior player connected with the first eighteen who is emergency to the senior side is paid £1 10/ ($3), besides the ordinary training fee of £1.
Second eighteen players receive 10/ per match, and if promoted to the senior side secure £3 ($6) per match.
There is thus plenty of incentive to players to join up with such sides as Carlton, and the old argument comes up that gate receipts should be pooled if the weaker clubs are to be able to pay their way and build up powerful sides." (The Argus)

September 15
Final round for the season
Carlton played St.Kilda at the Junction Oval.
A sensational walk off!
"Twelve minutes after play commenced in the match between St.Kilda and Carlton, with the scores 1.0 to 0.2 in favor of Carlton, owing to the very heavy rain W. Cubbins, captain of St.Kilda, took his men off the ground. He was followed off by the umpires and then by the Carlton players. After a lot of argument Cubbins refused to take his men back. R. Job, the Carlton captain again took his men on to the field. Umpire Hayes then bounced the ball, and White kicked another goal for Carlton, and all players then left the field, with the scores Carlton 2.0, St.Kilda 0.1" (The Age)
St.Kilda score typo error? see below
Carlton team; (27 named)
From; Arrell, Boland, Clarke, Crowe, Dougherty, Dunn, Gannon, Gillard, Jenkins, Job, Jones, M. Kelly, Lynch, Lunt, McDonald, McLaren, Murray, Price, Quartermain, Quigley, Quinn, Savage, Simmons, Stewart, Thompson, Viney, White
Goals; unknown, White
Carlton eighth
According to the Football Record, Carlton were awarded the game.
The Record's ladder has Carlton with 8 Wins and 32 Points. (The Football Record did not publish For/Against/% for the Reserves Competition)
Played 18, Won 8, Lost 10, For 1313, Against 1501, 87.47%, Points 32 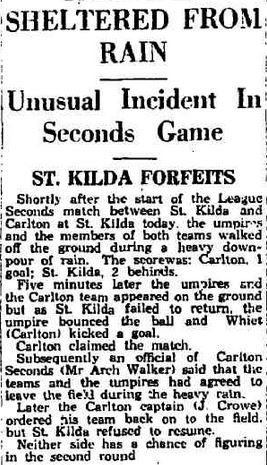 October 01 Monday
The Age (p6) says, "officials and players of the Carlton Second Eighteen Football Club visited Bendigo on the week end, and were entertained by the mayor of Eaglehawk, Cr. J. H. Beggs and welcomed by the president of the Bendigo League, Cr. T. R. Davies."