The Herald January 15 (p7) reported that Carlton player Graham Morcom 20, was seriously injured in a car accident at Fernbank near Bairnsdale. He has a fractured skull and is slowly recovering.
Fellow Carlton footballer travellers Jim Clarke and Bill Haydon both escaped injury.

June 05
"Beacause of the shortage of guernseys. St.Kilda Seconds have been playing in kahki sweaters this season, but last week took the field in their new uniform - a red guernsey with a black V, white cuffs and collar, and a black number." (Herald June 05 p25)
They were probably playing in Army surplus jumpers. 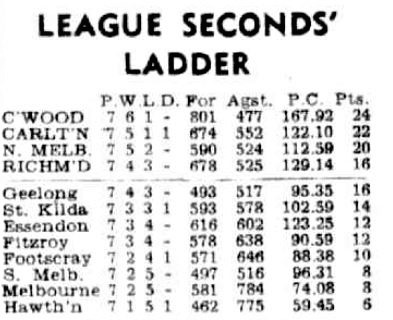 "At the end of the League seconds football match between Carlton and Collingwood on Saturday about 30 men crowded around field umpire McIntyre and punched him on the face. After he had reached the dressing rooms a crowd of about 300 stood outside and yelled loudly for about 20 minutes." (Daily News (Perth) August 16 p14)