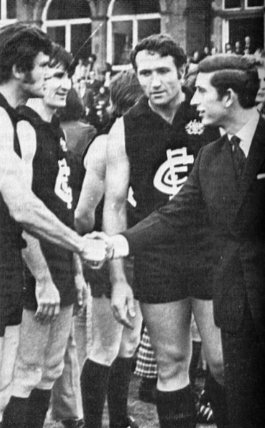 After the successful 1972 season the Blues went on a 'world tour' playing a league all-stars outfit in three locations, London, Athens and Singapore.

London
On the London leg at The Oval, the game was watched by Prince Charles (pictured). More photos of this can be viewed in our George Harris Gallery. Athens
For the Athens leg the teams were confronted with a playing area consisting of a soccer pitch roughly 60 yards wide and 90 yards long, with no goalposts. A decent roost from centre half back could sail through the goals. The game was played in a relaxed atmosphere in front of a small crowd with umpire Don Jolley officiating. It turned out that earlier matches scheduled for Moscow and West Germany had been arranged, but then cancelled by their hosts, requiring the games to be transferred!

Carlton & The All Stars

At the end of this season the Blues embarked on a overseas tour playing games in England and Greece against an All Stars team comprised of some of the best of the rest of the VFL.


Carlton beats All Stars by one goal.