Australian Rules Football was a demonstration sport in the Brisbane Commonwealth Games in 1982.

An exhibition game between the premiers of 1982 (Carlton and Richmond) was held at the Gabba as an official Demonstration sport of the XII Commonwealth Games. The ground was a sell out and patrons saw Richmond reverse the grand final result by defeating the Blues by 18 points, Richmond 28.16.184 defeated Carlton 26.10.166.

If you have any further information about this game please contact the Blueseum.


When Tigers ruled the Commonwealth

On the eve of the 2014 Glasgow Commonwealth Games, Scotland, Tony Greenberg turns back time, to look at Richmond’s successful involvement in the 1982 Brisbane Games. Just 11 days after Richmond had gone into the 1982 Grand Final as a warm favorite against arch rival Carlton, and lost by 18 points, the Tigers had a unique opportunity to gain some quick revenge. Our home-grown game of Australian Football had been given the green light to be part of Brisbane’s Commonwealth Games, as a demonstration sport. The two powerhouse teams of the day, Richmond and Carlton, were to showcase Australian Football at the Gabba which, back then, was far better known for hosting cricket matches and even greyhound races for a period of time. Although nothing can erase the bitter memories of defeat in a league Grand Final, the Tigers were keen to gain some bragging rights over the Blues by winning the prestigious exhibition match. On Wednesday, October 6, 1982, a crowd of about 15,000, and an international TV audience of several million, saw Richmond, with Kevin Bartlett and Maurice Rioli in typically brilliant form, take home Gold, defeating Carlton in an entertaining match that produced a staggering 54 goals in total.

Here’s a report on the match, which appeared in ‘The Age’ newspaper from journalist Neil Mitchell (yes, the same man, who’s now a top-rating broadcaster on 3AW) . . . “Do not let it be said that yesterday’s Commonwealth Games exhibition Australian football match was without tense moments, despite the obvious problems of players having to turn out for what Carlton coach David Parkin described as a ‘repechage’. And further, let there be no doubt that the most nerve tingling of these moments came during the three-quarter time interval. It was then, as the Carlton and Richmond sides gathered for their all too necessary rest, that a group of Australian athletes, dressed in their team uniform, decided to provide a brief exhibition of their own. Headed by 800-metre chance Peter Bourke, and the back-pocket-like builds of Bev Francis and Gael Mulhall, the athletes proceeded to criss-cross the ground with a not entirely adept display of the great Australian game. Now, fit as these people may be, there are different muscles required in kicking, marking and tackling than there are in most forms of athletics. So it was with some discomfort that a section of the crowd watched the performance, dreading the inevitable torn hamstring, jarred knee or broken finger. But it didn’t happen, so we returned to the football and the tension eased.

The Grand Final replay, incidentally, was won by Richmond by 18 points, the same margin by which Carlton won in the rather more serious match 11 days earlier. The football was high scoring on the small but incongruous Gabba ground – Richmond 28.16 (184) to Carlton 26.10 (166) – and there was the customary Carlton third quarter burst which yielded 11.2. But as an exhibition match it was exactly that. There were about 15,000 enthusiastic supporters at the ground (many dressed in the strange footy garb of shorts, team scarf and nothing else) but the match lacked ferocity. The Richmond side was obviously more determined, even more motivated, than Carlton. After all it had something to prove. But the most significant football happening of the day was that Brian Taylor limped from the ground after again injuring his right knee, which was operated on earlier this year. Taylor, whose future at the club is under a cloud because he did not play in the Grand Final, said after the game the injury was “not too bad”. That probably remains to be seen, and he is to seek medical advice when he returns to Melbourne.

Richmond coach Francis Bourke and his players were delighted by the reversal they achieved, and they fought hard for it. “We had an obligation to ourselves and to our supporters,” Bourke said after the game. “We wanted to win for our own peace of mind.” Parkin and Bourke agreed that the exhibition lacked the “ferocity” of the Grand Final, which was not surprising. Both also defended the standard of the game. Parkin said he believed the game as an exhibition offered everything Australian Football had to offer. But he agreed it was hard for the sides to come up so soon after the big event. “Who really wants to play an exhibition immediately after a Grand Final,” he asked. “I think it would be the most difficult emotional experience that an athlete could face. It is like missing out on Gold and then having to play off for Bronze.” But he said the players were sufficiently professional to play the match “in the right way”. For the record, Richmond’s Maurice Rioli topped off his superb Grand Final performance with best on the ground yesterday, Kevin Bartlett kicked classic Bartlett goals and Peter Bosustow took classic Bosustow marks. Perhaps we really were all just a little too pre-occupied with Peter Bourke and 800 metres.” - richmondfc.com.au

AUSSIE RULES FOOTBALL AT THE COMMONWEALTH GAMES
Australian Rules Football had a prominent, but largely forgotten, place at the Brisbane 1982 Commonwealth Games, when the Commonwealth Games Federation worked out an agreement with the directors of the Victorian Football League (VFL) to play an exhibition game between the VFL Grand Finalists – Richmond and Carlton – at the Brisbane Cricket Ground on 6 October 1982. As part of the Commonwealth Games, the host city had the opportunity to showcase a pair of demonstration sports. Like Melbourne did in 1956 when hosting the Olympics, Brisbane chose Australian Rules Football as one of the sports. But unlike the Melbourne Olympics, the game was contested by the two VFL Grand Finalists rather than two representative sides. The general manager of the VFL, Mr Jack Hamilton, said there would be a $50 bonus for each player in the winning team. Players will receive a total of $30,000 prizemoney for the game, which is to be a highlight of the Commonwealth Games. The match was meant to be played 12 days after VFL grand final, but was played 11 days after the grand final on 6 October 1982.

Therefore the prospect of another clash between fierce rivals Carlton and Richmond might have been a little more highly anticipated than the other exhibition sport of table tennis. Especially after their nail-biting VFL premiership decider less than a fortnight before, both teams were primed for another thrilling display in front of Prince Philip, a full house at the Gabba, and an international audience in the millions. As the completion of the most recent renovations were expediated to completion ahead of the AFL 2020 Grand Final, the Gabba in the 1980s looked a lot different than it does today. The ground in the Brisbane suburb of Woolloongabba featured a random collection of buildings and stands around its boundary, a boundary which followed a greyhound track that circled the cricket arena that remained in full operation until the early 1990s. The unusual shape of the ground made for an intimate football setting with the goals well within reach from the centre square making for a high scoring match in front of the capacity crowd of 15,000. Just 11 days after their heartbreaking 18-point VFL Grand Final defeat, the exhibition game provided an opportunity for the Richmond Tigers to get revenge against one of the club’s fiercest rivals in the Carlton Blues. The Blues, on the other hand, viewed the game a little differently, with Carlton coach David Parkin derisively referring to the game as a ‘repechage’. But it was still a game between bitter rivals, and once players stepped over the white boundary line the hostilities were renewed between the two old foes. Because of the exhibition status of the match and the size of the ground, defence took a back seat to attack. With Kevin Bartlett sprinting down the wings, Peter Bosustow taking big marks, and Norm Smith Medallist Maurice Rioli repeating as best on ground, the game was an incredible contest with 54 combined goals being kicked by the sides. Parkin was more positive post-game than he was pre-game, telling reporters he believed the game as an exhibition offered everything Australian Rules Football had to offer. 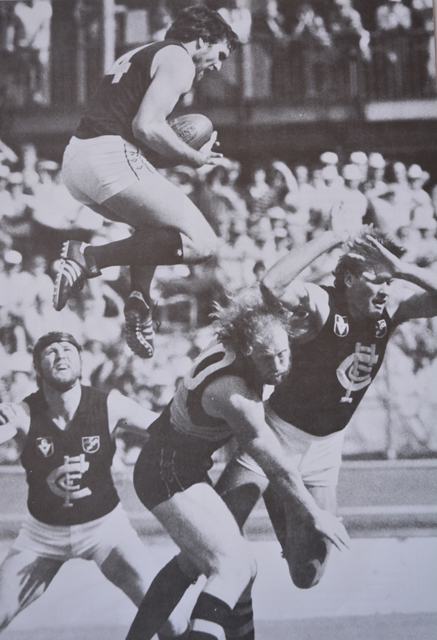 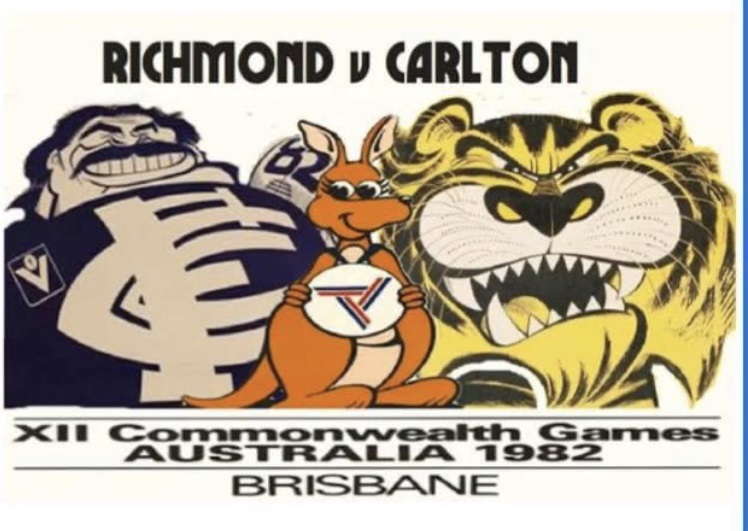