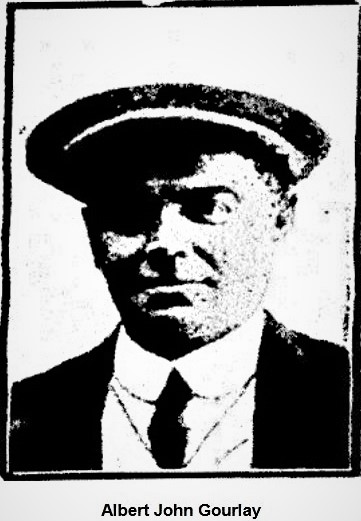 This image is courtesy of Cathy Sedgwick's article, ww1austburialsuk, see link at the bottom of this page.

The only Carlton player to be killed in action while serving in the armed forces of another country during World War 1, Albert John ‘Bert’ Gourlay played a total of six VFL matches with Melbourne and Carlton during 1903 and 1904. When his football career voluntarily ended, Gourlay emigrated to New Zealand, and later enlisted to fight with the NZ army at the height of the Great War in 1917. In November 1918, he was severely wounded in action in France, and died in hospital only ten days before the ceasefire.

Gourlay was born at Emerald Hill (South Melbourne) on July 31, 1881. He grew into an athletic young man, and a capable footballer with VFA club West Melbourne. In 1903 he joined Melbourne in the VFL, playing three matches and kicking a solitary goal as the Fuchsias struggled in the early rounds of the VFL’s seventh year. Bert didn’t play in a winning side with the Red and Blues, and left before the half-way point of the season.

In 1904 Gourlay found his way to Princes Park, where Carlton coach Jack Worrall had let it be known that he was prepared to give opportunities to any footballer with confidence in their ability. Bert made his debut for Carlton at the Brunswick St. Oval in June, when the fourth-placed Blues took on ladder-leaders Fitzroy in a cracker of a match that eventually went to the Maroons by 4 points.

Gourlay celebrated the only win of his VFL career the next week, when Carlton overwhelmed South Melbourne by 24 points at Princes Park. Running off half-back, he combined well with the Blues’ other defenders, and held his place in Carlton’s team for his third senior match against Geelong. A strong breeze off Corio Bay greeted the teams as they ran out for that game, and right from the first bounce Geelong had most of the play. But their wayward kicking for goal (they had 15 scoring shots to Carlton’s 10) allowed the Blues to force a somewhat lucky draw, and Bert Gourlay’s career at Carlton wound up impeccably balanced at one win, one loss and one draw.

In the years after Bert’s departure from Princes Park, Jack Worrall forged a mighty football team, one destined to win three flags in a row from 1906 to 1908. By then, Gourlay was far away across the Tasman in New Zealand, where he married in 1909, and settled into his working life as a commercial traveller around the city of Wellington.

In 1914, Australia and New Zealand joined Great Britain in declaring war on Germany, beginning the bloodiest and most costly war to that point in human history. Two years into the conflict, Bert heeded the call of his adopted country and signed up to fight with the Wellington Infantry Regiment. For reasons unclear, his age on his military records was given as 43, when in fact he was 36.

He sailed for Europe with a draft of reinforcements in August 1917, and within a matter weeks was pitched into front line action in some of the toughest fighting of the whole war. In late October 1918, Private Gourlay was grievously wounded when his regiment took part in one of the last major offensives.

He was evacuated to hospital in England, but died of his wounds on November 1, 1918. Along with many other British Commonwealth soldiers, sailors and airmen, Bert Gourlay lies buried at the Brookwood Military Cemetery in Surrey, UK.