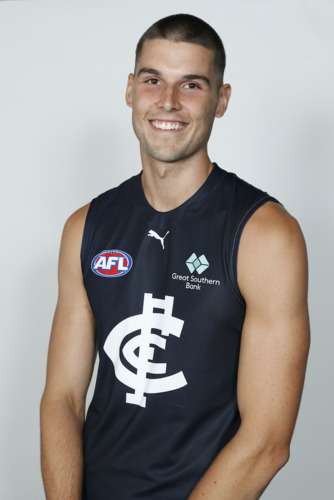 After performing well for the Northern Blues, Mirkov was drafted to the 'main game' in the 2021 Mid Season Draft. Alex Mirkov quite literally is a big acquisition in the 2021 NAB AFL Mid-Season Rookie Draft. Alex Mirkov, who featured in the opening two games of Carlton’s VFL season in 2021, has taken another step in his rapid rise onto an AFL list, signing an 18-month contract to wear the Navy Blue. The 210-centimetre ruckman has played the last two years of football at Old Ivanhoe in the VAFA after playing volleyball at AGSV level for Ivanhoe Grammar. Mirkov proved his wares as a tap ruckman for the Blues in the opening fortnight of the VFL season after impressing in practice matches, recording 36 hitouts against Brisbane in Round 2.

The mid-season draft was held after the conclusion of Round 11 of the 2021 AFL season on 2 June. The draft was only open to clubs with inactive players on their list and vacancies available, such as long term injuries or retirements. The Blues utilised this due to Caleb Marchbank's long-term injury.

After turning 21 last November, Mirkov now adds depth to Carlton’s ruck division alongside Marc Pittonet and Tom De Koning. Head of List Management Nick Austin said Mirkov’s selection was reward for hard work, and was someone who the Club expected to take further strides with his development. “We’re delighted to welcome Alex to our AFL playing list,” Austin said. “We’ve got to know Alex well during his time with our VFL team: he’s really committed to his craft and someone who we see can take his game to a few more levels. “We identified the ruck position as an area where we wanted to add to, and Alex certainly does that. “He’s shown throughout the VFL pre-season and opening weeks of the campaign that he’s able to give the midfield group first use and isn’t afraid to get his hands dirty. “We can’t wait to get Alex into our program and working with our ruck coach Matthew Kreuzer, which we think is really going to accelerate his development.”