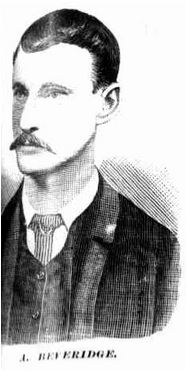 
1886 June 05
Beveridge made his senior debut in the match against Fitzroy at Brunswick Street.
The Melbourne Punch June 10 said;
".... whilst the new addition from the ranks of the Carlton second twenty - Beveridge by name - fully justified his selection among the top sawyers of the famed dark blue."

1886 June 26
Carlton played Sandhurst in Bendigo. The Bendigo Advertiser (29 June) said that Beveridge was a former Sandhurst player, and he was one of the Blues' better players on the day.

"Mr. Alexander Beveridge, linotype operator, who has been an employee of "The Herald" and "Weekly Times" for more than 30 years, died on Wednesday night at "Bethedsa" Private Hospital, Richmond. at the age of 55 years, after about a month's illness. Mr. Beveridge was formerly vice-president of the Melbourne Topographical Society, and always showed keen interest in it's welfare. He came originally from the Bendigo district, and was formerly on the "Bendigo Advertiser."
In the late "eighties" he was a well known Carlton footballer, and played with W. McKechnie, J. Baker, and others who achieved fame in the football field. He also played cricket with North Melbourne in Boyle and Scott's competitions, and, later on, for Carlton. Mr. Beveridge leaves a widow and a married daughter."
(Bendigo Advertiser May 17 1918 p8)

Relation to W. Beveridge or the same person?