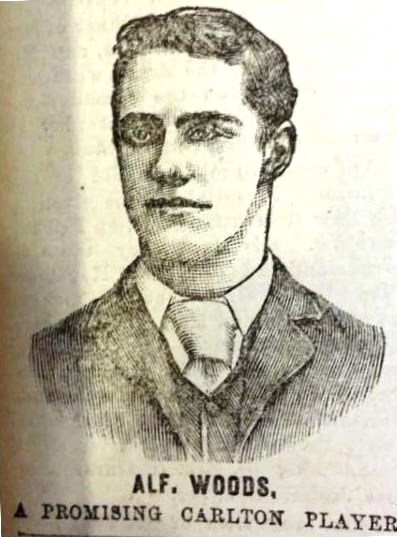 1893 Alf Wood recruited from Daylesford.
He had played well in the centre for Carlton in the pre season matches, and big things were expected from him, more so now, that Billy Strickland had walked out on the club.

1893 April 29
A. Wood name appears in a 35 man Carlton team list to play a pre season match against Carlton District on the University ground.

Wood appears in many Carlton teams for the first half of the 1893 season.
There were more than one Woods playing at this time.

1897 May 8
The Argus report of the Melbourne - South Melbourne V.F.L. game mentions, that former Carlton player Wood is playing for Melbourne after a stint at Maryborough "As having all the qualifications of a dashing goal defender."
He played 46 V.F.L. games for Melbourne and scored 4 goals.

The Daylesford Advocate reported on a presentation to Alf on him leaving the town.
To read click here> http://nla.gov.au/nla.news-article119530397