The Age April 11 1960 reported A. White had transferred to Mildura Imperials.

White was recruited from Avenel.

He was born in Allan Graham White in Carlton in November 1933 and raised in nearby Fawkner, White ultimately relocated with his family to Avenel where he found work as a woodchopper. Chasing the leather for Avenel Swans on weekends, White first attracted the interest of a South Melbourne talent scout, but instead resolved to follow his football dream with the Blues whom he’d supported as a kid.
and after his days at Carlton returned to Avenel and died aged 84 in June 2018 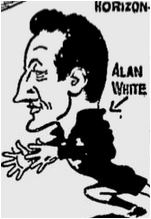