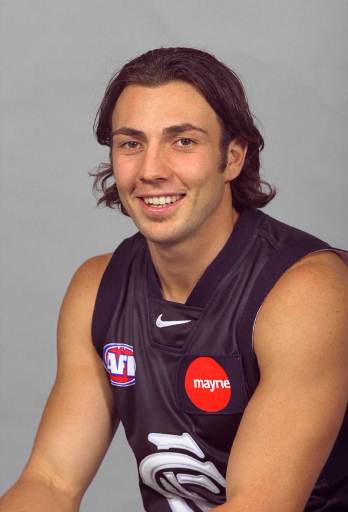 
Anthony Franchina, who wore #45 in over 100 games for the Navy Blues, was a 176cm tagger who was on the list between 1997 and 2004. A hard at it type, he was probably more famous for taking opponents out of the game than any possessions or goals he scored himself. But in the end, Franchina is probably satisfied with that, having racked up 100 games and as of 2007, being the only Blue to have his name on the #45 locker.

He was originally a 'Supplementary List' player for the Blues, before being drafted from that list in 1996. His original club was Newlands-Coburg, he had the unique 'honour' of playing for two TAC teams, the Preston Knights and the Calder Cannons. This may have occured when there was a realignment of boundaries after the Calder Cannons was entered into the TAC Cup competition.

Franchina will forever be linked to Saints great Nicky Winmar, who blew up at him in a game at the MCG in Round 20, 1998.

Franchina was a constant in the team from about 1999-2002, with 24 games in our oh-so-close performance in 2000, 17 in 2001 (restricted by foot and hamstring injuries at either end of the season, keeping him out of both finals) and 20 in our maiden wooden spoon year of 2002. Come 2003 and the introduction of Denis Pagan, Franchina would find his opportunities more limited, managing only 13 games, spending a lot of them on the bench and never managing double figure possessions, while playing a number of games in the VFL. In 2004 he didn't play a senior game, playing most of the year in the VFL but also missing a number of weeks with a thumb injury. A dedicated trainer, Franchina was often seen in 2004 attempting to help out our Irish recruits after training.

Franchina was delisted at the end of 2004. He went on to play with North Ballarat in the VFL, before joining the Carlton affiliated Northern Bullants for Season 2006.

In 2007, Franchina - in conjunction with former Blues Corey McKernan and Justin Murphy - would feature in a little bit of football press once more when they were selected as the Carlton-linked on-ball grouping for Heidelberg in the Northern Football League (formerly known as the Diamond Valley FL). In 2009, he and Justin Murphy played together in a premiership with the Heidelberg FC. Franchina would end up playing in three premierships and claimed a best and fairest with Heidelberg, mid season in 2011 he transferred to EFL club Balwyn, Pascoe Vale (2012), Mornington (2013 - 2015) and Eaglehawk (2016) in the Bendigo FL. In 2018 Franchina headed to EDFL club Tullamarine.