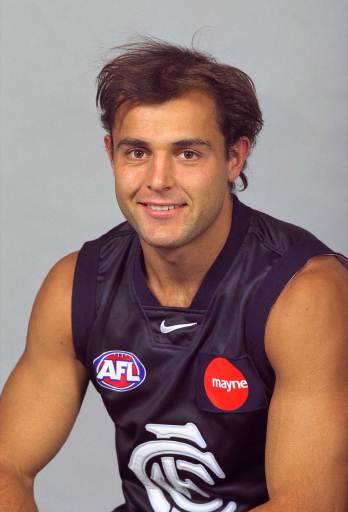 Ben Nelson was recruited from Sturt. The wearer of the #15, Nelson first came across to the Blues from the forming Port Power, joined by single-gamer Andrew Balkwill in a trade for Blue forward pocket Brent Heaver. Nelson looked impressive enough, the guy was a ball of muscle, had good pace and could kick it a mile. Tried mainly as a half back flanker or tagger, Nelson was solid but to be fair, at times, loose as a defender. His natural attributes kept him in or around the Carlton seniors for a number of years, playing a total of 40 games.

He played just the one game in 1997 (in light Blue), while Glandular Fever and hamstring problems would restrict him to just 7 games in 1998. A knee injury would delay his start to 1999 but he would go on to play every game from Round 6 onward, including the Grand Final. After playing 7 of the first 9 games of 2000, he would fail to gain further senior selection that year and only manage 4 games in 2001- all but one as a late replacement - before being traded to Adelaide (who he had played his first and last game for Carlton against) at the end of 2001 for David Gallagher. He went on to play another 12 games for the Crows in 2002, bringing him to a creditable 52 AFL games in total.

Following his AFL career, Nelson returned to Sturt. He had been a member of Sturt's 2002 premiership team (as an AFL-listed player allocated to Sturt when on reserve), and in his first full season back at the club, 2003, he was Club Champion. He was made captain of the club in 2004, and held that position outright until 2006; from 2007, he was co-captain with Jade Sheedy. In 2007, at the age of 30, Nelson was equal second in the 2007 Magarey Medal. Nelson retired at the end of 2010, after playing more than 200 games for the Double Blues in his SANFL career. He and his father Phillip are the only father/son combination to have each played 200 games at the same SANFL club. In 2011, Nelson played for the Bute Football Club in the Yorke Peninsula Football League. In 2012, he became the coach of the Scotch College Adelaide first XVIII, Nelson is himself a Scotch College old boy

1999 - The Past Players' Association Encouragement Award