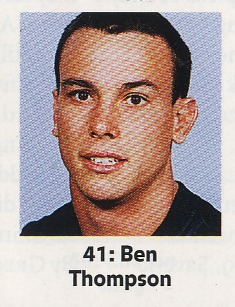 Ben Thompson was drafted at pick 83 in the 1997 Draft as a 186cm 80kgs forward. At the time, very few good players ever came from Queensland - the main exception being Jason Dunstall - but shortly after players would start to flow e.g. Nick Riewoldt. From Kedron Grange, Thompson had an impressive physique and could kick the ball nicely, but just couldn't seem to find it.

Thompson is often identified by the initial J to distinguish him from the left footer Ben Thompson who played with St Kilda, and perhaps one of the South Australian teams. Our Ben Thompson fits into that unfortunate category of single game players, debuting in Round 1, 1999, alongside fellow debutants Matthew Lappin and Brett Backwell. He gathered just 4 possessions but was then diagnosed with Glandular Fever. He eventually returned to the Reserves, where he had also spent the whole of 1998, though an ankle injury did sideline him for 4 weeks. A knee injury ended his 1999 season prematurely, before he had a chance to earn another senior recall and he was not retained beyond that year.

Thompson climbed Footy Everest once - at the MCG. To be fair, that's a pretty good stage to play your only game of AFL football. The main problem for Carlton was that three players from the 1997 National draft, Thompson, Trent Hoppner and Adam Chatfield, each only played the one game.

Thompson wore #41 for the Blues. Thompson was originally recruited from the Northern Eagles in Queensland, and prior to that he had played with Kedron Grange.