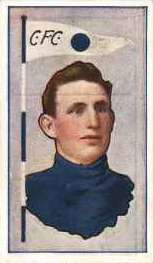 William John ‘Billy’ Dick was a remarkable individual who triumphed over disability and rejection to play VFL football at both Fitzroy and Carlton. A fine high mark, he was noted for his curious habit of turning his face side-on as he leapt for the ball – because he was blind in one eye!

Despite that handicap, Billy played more than 150 senior VFL games, captained Carlton’s 1914 Premiership team, and regularly represented Victoria in interstate carnivals. He would surely have led the Blues to a second successive Premiership in 1915 too, had he not fallen foul of the judiciary midway through the year and been hit with a heavy suspension.

Born in Stawell in 1889, Billy was playing with bayside Brighton at the time of Carlton’s 1906-07-08 triple flag triumph. Confident of his ability, and with a burning ambition to test himself at the highest level, he wrote to the Blues asking for a trial, but was turned down.

So he then approached Fitzroy - where he was welcomed, and quickly demonstrated that he was a player of real ability. Strong in the air, determined and versatile, he played 53 games and booted 40 goals for the Maroons as a follower-forward between 1908 and 1910, including 26 goals in 1909 to be the club’s leading scorer.

By then, Carlton had had plenty of time to rue their earlier decision, and launched a concerted effort to get Billy back to Princes Park. No doubt assisted by the VFL decision to allow player payments from that season on, Dick was eventually persuaded to switch clubs, and joined the Blues in 1911. At centre half-forward, he was an asset all year, and one of Carlton’s major contributors in our 21-point Semi Final loss to Essendon. The following year, the third ANFC Championships were played in Sydney, and Dick captained the Victorian side that won all of their five games.

In 1912, Dick was appointed vice captain of Carlton under Jack Wells, at the same time as coach Norman Clark asked him to take over the key defensive post at centre half-back. Billy took to that challenge like a duck to water, and almost overnight became one of the game’s best defenders. He represented Victoria again in 1913 and 1914, before capping his career with an outstanding individual effort in Carlton’s dramatic 6-point victory over South Melbourne for the 1914 flag. The Argus newspaper praised Billy’s play in his first Grand Final, noting that throughout a torrid match, he was ‘cool and sure in defence’ and clearly the Blues most effective player.

Six months later, during Carlton’s round 10, 1915 clash with the Maroons at Brunswick Street oval, Dick was reported for striking Fitzroy’s Jack Cooper, and for using insulting language to the field umpire. At the subsequent VFL hearing, the second count brought a reprimand – but the first charge resulted in a 10-week suspension that effectively ruled Carlton’s captain out of the 1915 finals. The club was incensed by the penalty, and vigorously appealed the suspension on the grounds that it was unconstitutional - all to no avail. The League stood its ground, forcing Billy to watch from the stands on Grand Final day while his Blueboys made it two flags in a row with an emphatic win over arch-rivals Collingwood.

Dick played in his third Grand Final in 1916 at the culmination of a football season totally disrupted by the eruption of World War 1 in Europe. As thousands of young men signed up for war service, only four clubs; Carlton, Collingwood, Richmond and Fitzroy remained in the competition. Each team played the others four times in the season, and of course, all made the finals.

They finished in the order above, but it was Fitzroy who struck top form at the right time and almost unbelievably, knocked out Carlton by five goals in a surprisingly high-standard Grand Final. When the Maroons mounted their challenge in the second half of the match, Billy was sent forward and kicked three long captain’s goals, but even so, he alone couldn’t halt Fitzroy’s last quarter surge. The Roys thus became the first and only VFL team to win the wooden spoon - and the Premiership - in the same season!

The return of Geelong and South Melbourne in 1917 restored a semblance of credibility to the competition, but Carlton’s season ended at the first hurdle once more when Fitzroy were too good for the Blues in the Semi Final. In his last match as captain, Billy steered through another three goals from centre half-forward as the Blues fell just nine points short.

After that, Billy handed the captaincy to Rod McGregor in 1918, and his playing career at Carlton ended where it began – at the Junction Oval against St Kilda – in July of that year. The Blues couldn’t send him off with a win in his 100th game for the club (St Kilda came out on top by 27 points) but in the end that was coincidental, because Billy Dick’s place in the rich history of the Carlton Football Club had already been very much assured.

In 1919, Billy headed off to finish his playing days in the VFA with Brunswick, in a landmark player swap that strengthened the Association Magpies no end, and brought a talented wingman named Newton Chandler to Princes Park.

Forty-one years later, Chandler was still very much a part of the Carlton Football Club when Billy Dick passed away on the 18th November, 1960, aged 71.

What also makes Billy Dick's achievements all that more remarkable is that he was blind in one eye. Carlton fans would watch in awe, as Dick would angle himself to take a mark, making sure that his good eye was on the ball. - The A to Z of Football (Ken Piesse)

Original Carlton player and committeeman Andy McHarg in an interview in 1915 with the Sydney newspaper The Referee see Formation of the Club;
Of Billy Dick he speaks with the warmest admiration "He always goes for the ball, and not for the man."