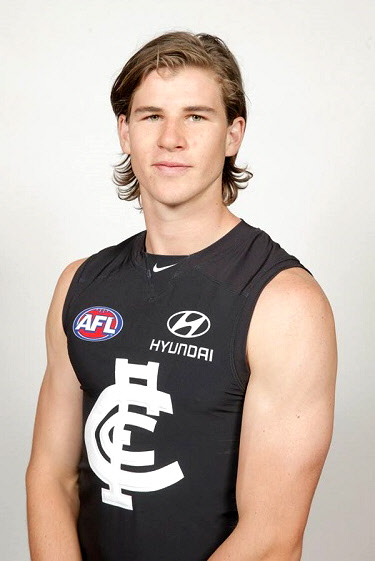 
Carlton recruited Billy Gowers – son of 1991 Hawthorn Premiership player Andy Gowers – at selection 6 in the 2014 Rookie Draft. A well-balanced medium midfielder who was strong in the air and kicked well with both feet, Gowers had impressed throughout his junior career at Xavier College and the Oakleigh Chargers. More than one good judge thought he was unlucky not to have been picked up in the 2014 National Draft.

“He was the very next player on my list on draft night,” Carlton Recruiting Manager Shane Rogers said after finally getting the versatile youngster to Princes Park. “Billy is a player with a lot of confidence. He played half-back through his junior career, but we think he’s more of a wingman. He’s a running, rebounding player who is a beautiful kick either side of his body.”

Indeed, Gowers showed flashes of ability in a handful of VFL matches with the Northern Blues in 2015, although a chronic shoulder problem prevented him from stringing games together. Eventually, he underwent remedial surgery in August, and was back on the track in time for the start of the 2016 season. However, despite playing in all but two of the Northern Blues games over the year, Billy was unable to recapture his best form, and in October 2016, he was one of six players who were told that their services were no longer required.

Thereafter, Gowers would line up for VFL club Footscray for the 2017 season, and from his performances here was picked up in the 2017 AFL Rookie draft by the Western Bulldogs with pick 9. In 2018 he proved something of a revelation up forward, cementing himself as an AFL player.

1995 Prelim. Final - Matt Clape in a collision with two Kangas.