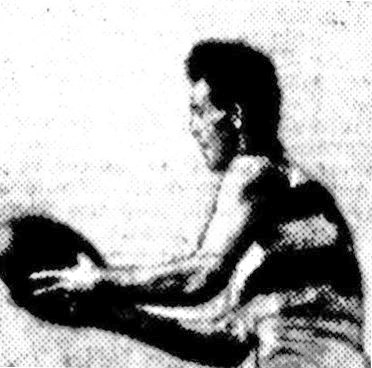 
After serving briefly with the AIF in the final weeks of World War 1, 21 year-old Robert Hope Wilson returned to Australia in 1919 and established himself at centre half-back for his local football club; the Kerang Blues. Then in 1923, at the age of 24, he was recruited by Carlton’s Navy Blues, and over the next three seasons, wore guernsey number 6 in 25 senior matches.

After making his debut on a half-back flank against Richmond in round 3, 1923, Bob went on to play ten games for the year. It wasn’t a good season for the boys from Princes Park however, and the club finished seventh on the nine-team ladder. Wilson managed another eight games in 1924, and seven more in 1925, when the VFL expanded to 12 teams with the admission of Hawthorn, North Melbourne and Footscray. Still Carlton continued to struggle, and despite blooding 21 new faces over the season, finished ninth again. Three different captains and two coaches couldn’t lift the side, and it is likely that a combination of all these factors brought about Wilson’s decision to call it quits and head back to the bush.

Fifteen years later in 1940, with Australia about to be swept into the maelstrom of World War II, Bob enlisted for active service with the Australian Army for a second time. He was 42 years old by then – two years over the statutory age for volunteers – but claimed he was 38 and was accepted. He served for five years with the 2/7 Infantry Battalion in northern Australia and New Guinea, and was promoted to the rank of Sergeant before his discharge in October, 1945.

The Permit and Umpire Committee received 170 applications for field umpire, and over 200 for boundary umpires.
Former Carlton player R. Wilson was one of the Field Umpire applicants.
(Trove: Referee April 10 1929 p13)