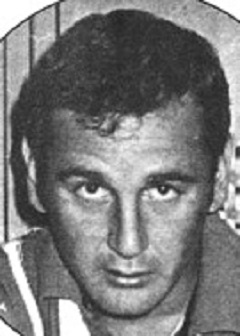 The older brother of North Melbourne champion Sam Kekovich, Brian was a star full-forward from Myrtleford who arrived at Princes Park in 1967 with huge expectations on his shoulders. In his 34 games for Carlton in two seasons, Kekovich showed the same mercurial ability as his brother later would, before his career was cruelly cut short by a chronic back injury in the midst of Premiership celebrations.

At 187 cm and 87 kg, with strong hands and a powerful left foot kick, Kekovich settled into a Carlton team on the rise and booted 36 goals in his first season. Carlton finished second after the home and away rounds of 1967, then disappointingly lost both of their finals matches to end the year in third place. Those failures spurred the Blues into season 1968, and although Essendon won both of their encounters during the home and away rounds, Ron Barassi's team gate-crashed the Grand Final with a 36-point upset win over the Bombers in the second Semi Final. Midway through that year, Brian had hurt his back when he was crunched in a marking duel, but ignored the pain and played on. He had made a big impression in only his second year of VFL football, booting 59 goals by the time the Blues faced Essendon in the flag decider.

A swirling cross-wind turned the '68 Grand Final into a close, mistake-ridden encounter. The match was highlighted by Kekovich's four goals in Carlton's winning tally of seven; and Garry Crane's outstanding game on the wing to be voted Best on Ground. In a tight finish, Carlton won by three points and claimed the club's first flag since 1947. Brian's contribution to that long-awaited triumph was significant, in so far as Carlton's five losses for the year were the only five matches he missed!

Only a short while after the Grand Final - when Kekovich sought treatment for his back - the diagnosis came as a total shock. He was advised to retire from football immediately - or risk spending the rest of his life in a wheelchair. Unfortunately for him and for Carlton, Brian's short but successful career in the number 16 Navy Blue Guernsey was over.