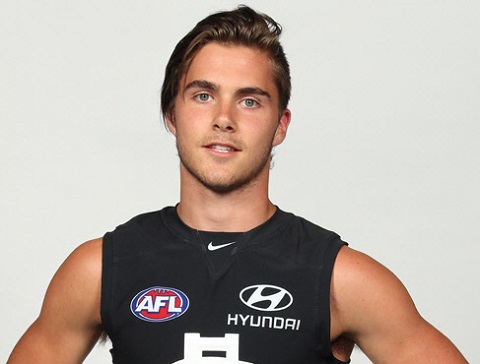 In something of a surprise, Carlton recruited former Haileybury College captain Cameron Polson at pick number 59 in the 2016 NAB AFL National Draft. Although undeniably talented, the 18 year-old midfielder-forward had suffered a serious shoulder injury midway through 2016. He hadn’t played since, putting his prospects in jeopardy.

Earlier, Polson’s season had seemed headed for new heights when he kicked four goals in a quarter to get Haileybury over the line in a tight contest against Xavier College. He impressed again with 16 disposals and 4 tackles in an Under-18 Vic Metro trial game, but then dislocated a shoulder in only his fourth match with the Sandringham Dragons, and his season was prematurely ended.

Even so, Carlton’s General Manager of List Management and Strategy, Stephen Silvagni, had liked what he saw in Polson and was pleased to call his name on draft night. “Cam possesses great speed and has real power,” Silvagni said.“He’s also a great tackler and has neat skills, so we’re excited to see just how far he can develop.”

Soon after arriving at Princes Park, Polson was allocated Carlton’s number 29 guernsey, most recently worn by rookie Billy Gowers. A single game in his debut year followed - our youngest ever Carton player on debut versus Port - before Polson was thrust forward to the defensive small forward role in 2018. Despite low stats, Polson showed a knack for finding the ball, even if the decision making at times was confused. However a big last game of the year with 2 goals showed reward for effort.

Carlton informed a further four players in late November that they will not be offered new contracts in 2021. Harrison Macreadie, Callum Moore, Fraser Phillips and Cameron Polson were told that their playing contracts will not be renewed, joining fellow delisted players Hugh Goddard, Darcy Lang, Finbar O’Dwyer and Ben Silvagni. For 2021 he signed up with Williamstown FC in the new eastern states lower league with former ex blue Harrison Macreadie.

Polson's junior football clubs prior to playing at Haileybury College were Dingley JFC and St Peters. Polson was born in Hong Kong.