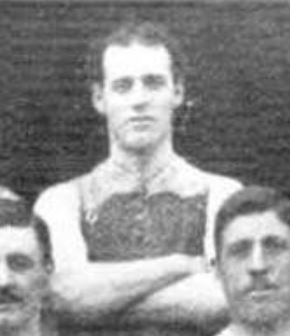 On a wet and blustery Saturday afternoon more than a century ago, Charles J. Ross earned himself a niche in the history of the Carlton Football Club as a member of the team that defeated Collingwood for the first time in a VFL match at Princes Park. Making the occasion even more significant, it was Charlie’s debut match for Carlton after joining the Blues from VFA neighbours Brunswick, and the Magpies were held to final score of 0.9 (9) – a record low score against the Blues that will now surely never be broken.

Unfortunately, apart from the bare facts of his career at Princes Park in the first years of the twentieth century, we don’t know very much more about Charlie. He was born in Beechworth in northern Victoria in 1878, and some 22 years later, linked up with Carlton in 1900. Pitched into the deep end from the start by being sent into the ruck against Collingwood, he pulled his weight in atrocious conditions, and the Old Dark Navy Blues pulled off a famous victory.

Over the ensuing three seasons, Charlie was a solid contributor to a Carlton team that had precious little success. Used mainly as a follower, with occasional runs in the centre, he played 37 matches and kicked eight goals as Carlton languished near the bottom of the competition ladder throughout.

Then, in 1902, the far-sighted appointment of former Fitzroy champion Jack Worrall as Secretary of the CFC seems to have coincided with major changes in Charlie’s circumstances. He played only briefly after that – four games all up in 1903-04 – and ended his career with a welcome 9-point victory over St Kilda at the Junction Oval in round 4, 1904.