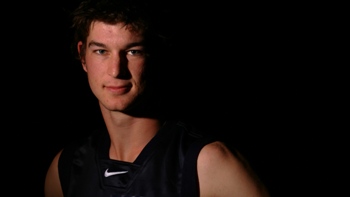 Craig Flint was a reliable defender who had a good finals series for Gippsland Power, the 2005 premier in the TAC Cup. Looked composed and assured at full-back and is a good size. Trained with Carlton during the pre-season and was the Blues’ second selection in the NAB AFL Rookie Draft.

Flint was taken as a Rookie by Carlton at the end of Season 2005, playing strongly all year in defence for the Northern Bullants until a broken leg prematurely ended his 2006 Season. Despite the injury, Flint was promoted to the Senior List at the end of 2006 owing to a series of strong performances throughout the year.

Unfortunately, whether it was the injury or otherwise, Flint was not able to recreate the form he displayed in 2006 and failed to gain senior selection. He spent the entire year at the Bullants, at times relegated to their Reserves. He was not retained on the club's playing list after 2007.

Flint was recruited from Sale via Gippsland Power.