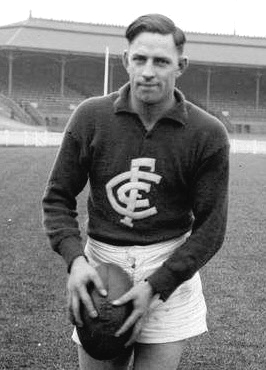 Although he was just 175 centimetres (or 5 feet, 9 inches) tall, Cyril Mann became a crowd favourite for his spectacular marking in a relatively brief career at Princes Park during the dark years of World War II. An agile forward with a big leap, he was a handy acquisition for the Blues over four seasons, before his career was interrupted by wartime service.

Mann was recruited from Silvan, east of Melbourne, in 1939. The story goes that Carlton’s captain-coach Brighton Diggins had been impressed by the aerial skills of the youngster in a local league finals match, and by 1937 he was being auditioned with Carlton Reserves. Eventually, Diggins gave Cyril his first outing at senior level on a half-forward flank for the Blues against Footscray at the Western Oval in round 3, 1939. Carlton won easily, and Mann kicked a goal on debut. However, his career in the VFL was thrown into doubt in September of that year, when Great Britain, France, and most British Commonwealth countries went to war with Germany and the Axis powers.

Like many of his team-mates, Mann registered for active service, while continuing to play football and waiting for the call to arms. He experienced his only taste of finals action in 1941, when Carlton was bundled out of contention by successive losses to Melbourne and Essendon. Asked to play at full-forward in both those matches, Cyril worked hard for a return of three and two goals respectively.

After another five games in 1942, he was finally called into uniform, spending two years on active service. In 1945 he returned to Melbourne, and pulled on the navy blue guernsey again, with the end of hostilities in Europe only weeks away. But for reasons unclear, Mann played just three more senior games before telling the club that he wouldn’t be going on.

Cyril’s last match wasn’t a joyous occasion. In May, 1945 (round 3 of a glorious Premiership season for the Blues) he sat on the bench as 19th man for most of the day, as Essendon won by exactly 100 points at Windy Hill - the first time ever in Carlton’s history that we had been beaten by a three-figure margin.

After departing Princes Park, Mann briefly joined VFA club Brunswick, then switched to Port Melbourne. In 1947, he starred at centre half-back (thrilling the crowd in an aerial duel with the legendary Ron Todd) when the Borough beat Sandringham in the 1947 VFA Grand Final.

Mann was of Aboriginal heritage – a fact that was not revealed until 2013, when Carlton historian Tony De Bolfo tracked down his surviving daughter, Karen. She was able to confirm that Cyril was the grandson of William ‘Bill’ Cooper; a highly-respected Indigenous leader and activist; and the nephew of Lynch Cooper, winner of the 1928 Stawell Gift.

Mann was awarded the Dave Crone Trophy as the best Carlton player in the Monday, June 14, 1937 Reserves match against Richmond at Princes Park. He played at centre half-forward that afternoon, in a remarkable game in which Carlton scored 13 goals to one after half time.

As well as starring in their Grand Final victory over Sandringham, Mann was awarded Port Melbourne's Best & Fairest award in 1947.