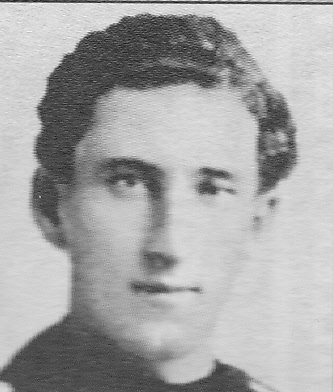 In these first decades of the 21st century, the surname Minogue is instantly familiar to most Australians through international pop music diva Kylie Minogue, and to a lesser extent, her sister Danii. But almost a century ago, in 1930’s Depression-era Australia, another Danny Minogue – a brilliant, tough-as-nails footballer from Bendigo in central Victoria, wrote his name into the history of Australian football with a long and successful career as a player and/or coach at six VFL clubs – including half a dozen seasons at Princes Park as coach of the Old Dark Navy Blues.

Daniel Thomas Minogue was born into a solid working class family of Irish Catholic heritage in Bendigo in 1891. In a time of economic hardship for all Australians, he left school early, and by the age of sixteen was working in the local gold mines to help support his family. The hard physical labour toughened the youngster physically and mentally, and helped make him a standout performer for the California Gully team in a strong local football league.

It wasn’t long before clubs from Melbourne were at the Minogue’s door, offering Dan opportunities in the big time. At first he was loathe to leave his family and the security of a full-time job to chase a dream – until the day he slipped and fell 20 metres down a mineshaft. Miraculously, he survived, but that brush with death or serious injury revised his plans. In early 1911, at the age of 20, he shifted to Melbourne to play VFL football with Collingwood.

A classic ‘Collingwood six-footer’ Minogue’s strength and endurance served him well in the ruck, at centre half-back or centre half-forward - where he played in the Grand Final against Essendon in his debut season. The match was a tense, low-scoring affair, remarkable because Minogue broke his collarbone in the first minutes yet stayed on the field for the entire game, while the Magpies’ Tom Baxter twice kicked into the man on the mark with shots on goal in the last quarter. Essendon held onto a slim lead in a torrid finish to claim the flag by six points.

In 1915, while Australia was plunged into the horrors of World War One, Minogue captained Collingwood into another Grand Final and another defeat, this time against Carlton. Playing at centre half-back, he was one of the Pies few consistent contributors in an emphatic 33 point victory by the boys from Princes Park.

After that, like many of his peers, Minogue opted to put his football career on hold and volunteered for service with the First AIF. He played his last senior match for Collingwood in March 1916, then swapped his football boots for army boots. By January, 1917 he was in France, holding the rank of corporal with the 3rd Divisional Ammunition Column. He was engaged throughout the bitter and costly campaigns in the Western Front, which led to the repulse of Germany’s last desperate assaults in early 1918 and eventually, to a blessed armistice in November.

When he signed up, Minogue had listed his brother Frank as his next of kin – perhaps to spare his parents the awful ordeal of being advised of his death or injury by telegram. In the months after the cessation of hostilities, with Dan still to return home, Frank received an official letter containing a copy of a report from Dan’s commanding officer. In part, the report stated that the CO wished to congratulate corporal Minogue for ‘the conspicuous manner in which he had conducted himself on the battlefield in the face of the enemy.’

Dan Minogue eventually returned to Australia in June 1919. He was 28 years old by then, and no doubt itching to get back into VFL football. Eventually, he did return – but surprisingly, not with Collingwood. In a somewhat murky episode, it seems that Minogue was displeased with Collingwood’s dealings with his close mate Jim Sadler, and when he made his feelings plain, the Collingwood committee told him to like it or lump it. Surprised and deeply disappointed, he walked out of Victoria Park and agreed to join Richmond as captain-coach for the 1920 season.

With the Tigers, he was an inspirational leader and a potent force in the ruck – especially so in the fateful Richmond–Collingwood Grand Final of that year. In that bitter-sweet victory, Minogue broke Collingwood’s spirit with his domination of the centre bounces and throw-ins, and made himself a Richmond immortal by bringing the Tigers their first VFL Premiership. He then rubbed more salt into Collingwood’s wounds by winning Richmond’s Best & Fairest award.

A year later, in the sleet and hail of the 1921 Grand Final against Carlton, he did it again. Another slogging battle of wills went the way of Richmond, who found a bit more when it counted to triumph over the Blues by 4 points.

Richmond’s dominance waned after their Premiership double, convincing Minogue to retire as their playing coach in 1925. He was 34 years old by then, with 180 career games and 75 goals to his credit. But VFL newcomers Hawthorn were in dire need of experience and leadership, and somehow convinced the battle-hardened warrior to saddle up for just one more year. He played for the struggling Mayblooms in the opening round of the new season – a 20 point defeat by Carlton at Glenferrie Oval – then bowed to the inevitable and hung up his boots for good to concentrate on coaching.

Three fruitless years at Hawthorn were enlivened in the last few months by approaches from Carlton. After having regularly been on the receiving end of Minogue’s influence as a player, the Blues saw him as the ideal replacement for retiring captain-coach Ray Brew. Finalists three years running, Carlton were an attractive proposition that Minogue ultimately couldn’t resist, and he took over the reins at Princes Park in 1929.

Minogue’s tenure at Carlton was generally successful – the Blues made the finals in five of his six seasons in charge – yet barren of the ultimate prize of Premiership. Our best opportunity came in 1932, after Carlton finished minor premiers, and swept into the Grand Final as favourites – ironically, against Richmond. But the Tigers continued their long run of success against the Blues, with a fighting 9-point win in another thriller between two of the fiercest rivals of all.

In 1935, after 117 games as coach of Carlton, Minogue was on the move again, this time to St Kilda. Minogue did not reapply for the position of coach for season 1935. At the end of the season, he told the committee that he had tried his best for six years to win the club a premiership and believed that he was not the man to achieve that feat. He thought a change of coach would better serve the club. He added that luck had been against the team and hopefully, with a new coach, that would change too. Carlton accepted his request and on 7 March cleared Minogue to St Kilda to coach there for 1935. The Saints lingered around the middle of the ladder in each of his three seasons in charge, and it looked like retirement was on the cards for Dan when the two parted ways in 1938, on the eve of the outbreak of another major conflict in Europe. But by 1940 the VFL was seriously depleted of quality and quantity of players. Struggling to keep its team together, Fitzroy turned to the experience and wisdom Minogue as senior coach. The ‘Roys, too, won and lost in just about equal proportion, and finished mid-table during each of their three seasons under Minogue, until he eventually called the curtain down for good in 1942.

Dan Minogue’s illustrious football career encompassed 85 games as a player, 96 as player-coach and 257 as a non-playing coach. He represented six clubs, took part in five VFL Grand Finals for two Premierships, and passed away on July 27, 1961 at the age of 70.

Thirty-five years later in 1996, he was rightfully inducted into the AFL Hall of Fame.