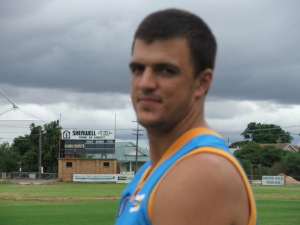 Daniel 'Bato' Batson was drafted by the Blues as a Rookie in the 2005 Rookie Draft. Batson was a young developing ruckman recruited from Wimmera Club Nhill via TAC Club Ballarat Rebels. He spent the 2005 and 2006 Seasons playing with the Blues feeder VFL Club the Northern Bullants.

Some of his stats/honours leading up to the National Draft were;
- 2003: 9 games, 3 goals, 6.6 PPG
- 2004: 16 games, 4 goals, 10.5 PPG
Strengths: Batson is a big country lad with good tap skills. He is also a very good kick for a ruckman, can nail targets and is pretty good by hand as well. Like most ruckman, he has plenty of scope for improvement, and is very good at the centre square bounces, often giving his midfielders first use of the ball. Weaknesses: Not too sure about his mobility - Daniel seemed to contest the initial ruck contest then stand there a lot of the time. Also a concern that he has only managed 7 goals in two seasons. Footydraft.com comment: Always a bit of a gamble with ruckman, but Batson may be worth a punt very late in the draft. If not, definitely worth looking at for a rookie list.

Batson lined up for the Port Adelaide Magpies in the SANFL for the 2007 season, he would spend 3 seasons with the Port Adelaide Magpies. He played 24 senior games and 31 reserves games with the Magpies during his three-year stint with the club. A highlight for Batson was winning the reserves league best and fairest after playing only 14 out of 20 games. He returned to his original club Nhill for the 2010 season. 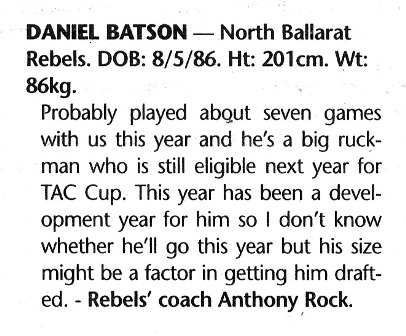