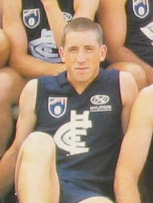 
Nicholson was taken with Pick 89 from the 1994 National Draft, and given the #37. Tried in a variety of flanker and pocket positions, Nicholson rarely impacted on Reserves games except in one main way - he could take a screamer. And he took many of them. Pack marking, especially given his slight size, was a real highlight of Nicholson's time at Carlton, which ended after a single season in 1995 when he played 22 Reserve games and scored 7 goals. Nicholson was last seen having a run with WRFL side Braybrook.