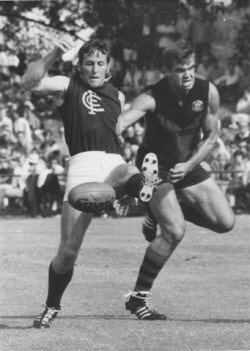 Doug Ringholt was born with an impressive football pedigree. His father, Stuart, won Coburg Football Club’s Best and Fairest award in 1940, before playing in no fewer than six Premiership sides with West Coburg. Later, he was a leading coach in the Essendon District Football League. One of Doug’s uncles, Jack Conley, played 135 games for Carlton, including the sensational 1947 Grand Final victory over Essendon, and one of his early mentors at Coburg Technical College was legendary Hawthorn and North Melbourne coach, John Kennedy senior.

With all that going for him, it was almost compulsory that Ringholt would stand out as a junior star at West Coburg prior to joining Carlton’s Under 19 squad in 1960. A slim flanker with a good aerial skills and plenty of determination, he worked his way up through the grades to make his senior debut as 20th man against Geelong in round 6, 1963 at Princes Park. The Blues suffered their first loss in what would eventually be a deeply-disappointing season, as Doug warmed the bench for most of the afternoon.

As so often happens to newcomers, Ringholt was omitted in his second week, only to be recalled as a reserve again for Carlton’s round 8 clash with Collingwood. On that cold and drizzly Saturday afternoon, a huge crowd of 38,000 squeezed into Princes Park, and saw a low-scoring, arm-wrestle of a match that eventually went to the Magpies by two points.

Those two games were the only taste of the big time for Ringholt in 1963. After biding his time in the Reserves for almost twelve months, he earned a recall at last in round 5, 1964, and ventured to the other side of Nicholson Street for a rematch against Collingwood at Victoria Park.

This time, Ringholt was included in the starting line-up, and forced to brave the gauntlet of spittle, rubbish and abuse that was hurled at him and his team-mates as he ran down the visitors race and out on to the arena to take up his position on a wing alongside Ian Collins and Cliff Stewart. Sitting fourth on the ladder and playing at home, Collingwood were raging hot favourites against the eleventh-placed Blues, and their first quarter showed why. Well on top, they kicked 6.7 to 2.2 in the opening term and coasted after that to win by 19 points.

Although that defeat really hurt the Blues, Ringholt was spared the axe, and asked to play on a half-back flank against St Kilda at the Junction Oval in round 6. The Saints weren’t doing all that well either – they were eighth, with 3 wins and 3 losses – but they were made to like champions by the inept Blues, who were thrashed by 48 points.

Early in the second half of that match, Ringholt was in the midst of his best game for the Blues when he was caught in a heavy collision involving Darryl Baldock of St Kilda and Gordon Collis of Carlton. Crashed into the rock-hard St Kilda centre square, Ringholt suffered damage to his back that was to hamper him for the rest of his life. “In consultation with coach Ken Hands, we decided that the team may be better served if I went off,” Doug recalled many years later. “In retrospect, I think my career would have been different if I’d opted to stay on.”

Carlton made eight changes to the team for the following week, including the omission of Ringholt with a severely bruised back. Eventually, he returned to the field with the Reserves, but as another wasted year wound down for the Blues it was obvious that Doug’s two-year tenure in Carlton’s number 35 guernsey was all but over.

He fielded offers from several interstate clubs, before accepting a recommendation from a former Blue in John Reilly, who convinced him to sign with the reigning WAFL premiers, Claremont. The Tigers used Ringholt at half back, and he gave them loyal and effective service. In just his third game in the WAFL, he ironed out West Perth captain Bob Spargo – establishing a reputation for tenacity that persisted throughout his 114 games over six seasons.

In 1970, a clash of wills with his coach Denis Marshall brought about Doug’s early retirement. He spent two years out the game, but was lured back to Claremont in 1972 to serve as the club’s runner when former St Kilda champion Verdun Howell took over the coaching role. Three seasons later, he repaid a debt in kind when he made a brief comeback for South Perth – coached by John Reilly – but lasted only seven matches before calling it quits for good.

During his years at Claremont, Ringholt developed a keen interest in blue water yacht racing – an interest that developed into a passion once his footballing days ended. As opportunities to join the crews of bigger and better boats came along, Doug was soon a regular at all the major ocean racing events in Western Australia. He participated in seven Sydney to Hobart races, winning Maxi Division honours on Freight Train in 1983, and fourth overall on Prime Suspect in 1984. Other notable contributions came aboard Allan Bond’s Apollo 3 in 1977, and Siska (under Roley Tasker) in 1979.

In more recent years, Doug has returned to grassroots football, serving as President of North Innaloo Football Club, and coaching youngsters in all age groups from Under 12 to Under 17.

Ringholt also wore Guernsey No. 33 during the 1962 season whilst playing with the Blues reserves team.

Tom and Jim Carroll at Training