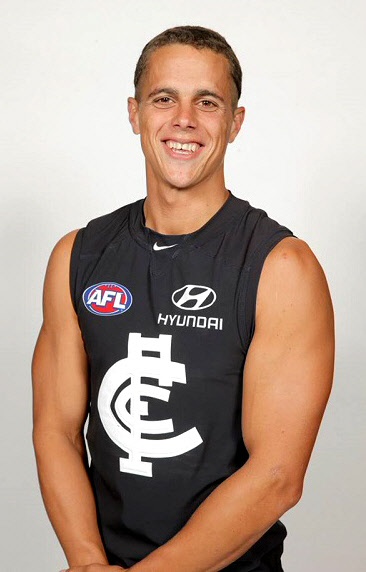 
Ed Curnow was Carlton’s first selection (number 18) in the 2010 Rookie Draft. A gritty, hard-running midfielder from Box Hill, he had been overlooked by several other clubs before achieving his ambition of playing AFL football with the Navy Blues.

Curnow’s journey to Princes Park began at Modewarre on Victoria’s Surf Coast, then Geelong College. He played TAC Cup football for the Geelong Falcons until 2007, and represented Vic Country in the National Under 18 Championships. In 2008 he was drafted by the Adelaide Football Club with their third selection in the AFL Rookie Draft (number 40 overall), but did not manage a senior game for the Crows and was delisted after just the one season.

Returning to Victoria, Ed signed with VFL heavy-hitters Box Hill. While his 2009 debut year with the Hawks was solid, he began 2010 in exceptional form, only to break his ankle half-way through the year. However, although he was sidelined for the Hawks' last eight games of the year, he had already polled enough votes to win Box Hill’s Best and Fairest award, and to finish third in the VFL’s top individual honour, the J. J. Liston Trophy. After that, Carlton was only one of a number of clubs who wanted to talk to him, with the Blues best-placed to snare him.

By the time he arrived at Princes Park and was allocated guernsey number 35, Curnow knew very well what to expect if he wanted to play at the highest level. Carlton’s coaching panel loved his commitment from day one, so he was an obvious choice as the Blues’ Nominated Rookie for 2011 - allowing him to play at senior level without an injury to a listed player. A couple of impressive all-round efforts during the pre-season NAB Cup competition kept him in the selectors’ sights, and it was no real surprise when he was one of three new faces named in the team to take on Richmond at the MCG in round one. On that warm Thursday evening in front of more than 60,000 fans, the Blues came up with a comfortable 20-point victory, and all three debutantes; Curnow, Nick Duigan, and Jeremy Laidler began their careers brightly. Curnow collected 24 possessions, 5 marks and 7 tackles in an eye-catching debut, topped off by the thrill of kicking his first AFL goal.

Over the next six weeks, Ed added grunt and depth to Carlton’s midfield, averaging 24 disposals a game, before his name was thrust into the headlines when he was the central figure in a controversial incident. Right on the quarter-time siren in the round 7 game against St Kilda at Docklands, tempers were already simmering when Curnow was crashed to the turf by a heavy bump. In obvious pain from a damaged shoulder, he was being helped from the ground as both teams headed toward their huddles - but Saints Leigh Montagna and Justin Kotschitzke deliberately detoured to bump him again. Carlton players reacted furiously, and the melee that erupted took a long time to disperse. In the aftermath, members of both sides were fined, and Montagna was suspended for a week for unsporting conduct. Despite a cracked collarbone, Ed returned later in the year to complete 12 matches overall, and the Blues extended his rookie contract for another season.

In 2012, Curnow continued to improve, as his elite endurance and reading of the play made him a run-and-spread weapon, In round 15 against Collingwood, he collected 24 disposals, 6 marks, 6 tackles and sent the ball inside the 50-metre arc on 4 occasions. A few weeks later, he laid 10 tackles and won 24 possessions in Carlton’s last-gasp win over Richmond. Although he was playing in a side that missed out on finals berth and was heavily criticised from all quarters, Curnow survived the end of year cull, and for the third year in a row was retained on the Blues’ rookie list.

When Carlton began 2013 under a new senior coach in Mick Malthouse, Curnow’s confidence took a hit when he was overlooked for the Blues’ first three matches. But once he was in the side, he stayed in, and reached an historic milestone later in the year when Carlton beat Richmond by 20 points in a cracking Elimination Final in front of an enormous crowd of 94,000 at the MCG. On that memorable Sunday afternoon, Curnow became the first Blue in the club’s history to rack up 50 games as a rookie, and he made the occasion doubly-sweet by keeping a tight rein on the Tigers’ captain Trent Cotchin. A few weeks later, shortly before his days as a Blue rookie finally ended and he was upgraded to a senior contract, Ed finished a close-up fourth in the voting for the John Nicholls Medal behind Kade Simpson, Andrew Walker and Lachie Henderson.

Although Carlton got away to a miserable start in 2014 and lost their first four games, Curnow was one of the team’s outstanding early-season contributors. Against Richmond in round 2, he gained 25 possessions, 7 marks and 9 tackles, following up with 33 possessions, 9 marks and 9 tackles in a shock defeat by Melbourne in round 4. Then, just as the tide began to turn, and the Blues were on their way to victory over the Western Bulldogs in round 5, Ed crashed into a point-post and fractured the fibula in his right leg. Six weeks later, he returned to the field for round 14, and played in all of the Blues’ remaining games to average 21 disposals, 4 marks and just under 5 tackles in his 15 matches for the year.

For a club enduring record levels of mediocrity, Carlton’s 2015 season reached a new low point. On the verge of crisis, the Blues sacked coach Malthouse after eight rounds, and won just four games for the year to finish last. Through it all, Curnow was one of a handful of bloody-minded stalwarts who kept plugging away week in and week out, earning gratitude and respect from all but the most hard-hearted of supporters. Regularly given run-with roles on the opposition’s most dangerous ball-winners, Ed never failed to deliver for his team, and the sight of him seemingly spent - bent over and gasping for air - before willing himself on to the next contest, is an abiding memory. He averaged 22 disposals and 4 tackles in 22 games over that bleak season, and was voted equal fourth Best and Fairest. 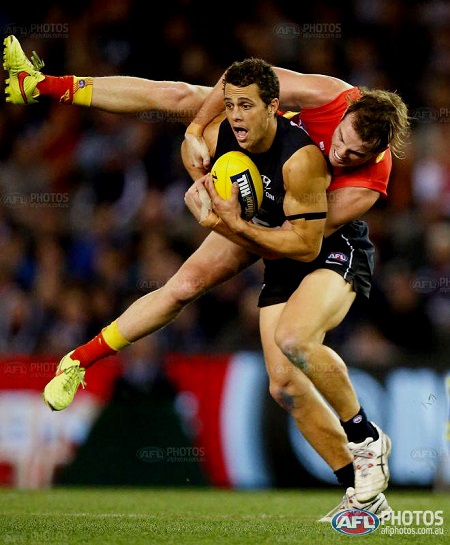 Later that same year, Brendon Bolton became Carlton’s new senior coach shortly before Ed’s youngest brother Charlie Curnow was recruited by the Blues. Ahead of the 2016 season, Ed was added to the team’s leadership group and the year began optimistically when the Curnow brothers played their first match together in navy blue against the Sydney Swans at Docklands in round 2. Although Sydney won easily, Ed worked tirelessly again with 24 possessions and 10 tackles, while Charlie moved well, took some good marks and kicked his first career goal. The brothers played together another five times that season, but unfortunately not in round 12 – when Ed hoped to celebrate his 100-game milestone with a win over St Kilda. Instead, he was concussed early, and St Kilda took the honours. Still, he finished his sixth season at Princes Park by setting new standards for himself in a number of key performance indicators, and was voted Carlton’s Best Clubman as well as fifth Best and Fairest.

An injury impacted 2017 would follow, before another top 5 B&F performance from 21 games in our difficult 2018 again showed the value of hard work. With an exciting and emerging list coming through in 2019, the outstanding work ethic of Ed will be called upon again in order to ensure our drive outside of the Bottom 4.