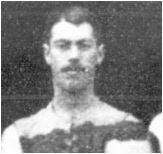 Edward Charles “Eddie” Prescott was a lively small forward who joined Carlton from his local VFA club Williamstown in 1904. At a time when the Blues were shaping as a genuine flag contender, he proved a good acquisition, kicking nine goals in his eleven matches, and earning a place in Carlton’s first-ever VFL Grand Final team.

Prescott made his debut for Carlton on a half-forward flank against Fitzroy at the Brunswick St. Oval in round 8, 1904. The Blues were continuing their transformation under their iron-willed coach Jack Worrall, and got to within four points of the reigning Premiers in a match that hardened the resolve of both teams.

Late in the year, as the Blues cemented second place on the ladder behind Fitzroy, Prescott was switched to a forward pocket, and played there in Carlton’s historic Semi Final win over Essendon at - of all places – Collingwood’s home ground at Victoria Park. Carlton led by one point at half-time, two points at three-quarter time, and three points at the final bell – although not without some last-minute jitters as Essendon’s Jack McKenzie took a set shot at goal with only seconds to play, but missed. Carlton had climbed the mountain at last, and would meet Fitzroy in the Premiership decider at the MCG on the following Saturday afternoon.

Like most of his team-mates, Prescott had been handy in that triumph over Essendon, and so was retained in the team in a forward pocket when the Blues settled on their lineup to tackle the ‘Roys. A huge crowd of 32,688 packed into the MCG, and were treated to a fine exhibition of skills from both teams. The game was decided in the third quarter, when Carlton’s wayward attack scored just 4 behinds, while Fitzroy went forward twice, and goaled both times to take a 7-point advantage into the last term. From there they pressed home their advantage, and claimed their second successive flag by 24 points.

Prescott kicked one of Carlton’s five goals, but like most of his team was swamped in the end by Fitzroy’s confidence and experience. It would be another two years before the Old Dark Navy Blues would taste Premiership glory at last, and by then Eddie Prescott would be leading a different life. He retired from VFL football after just that one season as a Blue, and sadly, passed away at the age of 38 on the 21st June, 1919.