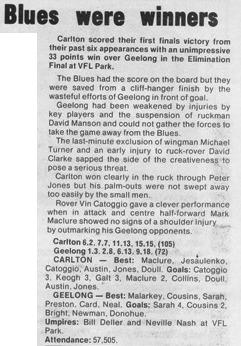 Both sides used the outer wing as a racetrack and took long runs bouncing the ball.

A low standard game, indicating that again, Carlton had lost form at the wrong end of the year. Geelong were a poor 5th team, who suffered injuries before and during the game, so a Carlton win was the only logical result.


''Blues too skilled!
Carlton's superior teamwork enabled them to score a 33 point victory against Geelong in the Elimination Final at VFL Park on Saturday. The Blues used their skilled hand and foot passing to initiate many attacking moves. Geelong had chances but squandered these with poor kicking around the ground and for goal. The Cat's full-forward Larry Donohue was one of the worst offenders managing, only 1.5. Carlton appeared the better team for most of the match, but struggled to shake off a determined Geelong challenge. Two separate scoring bursts by the Blues gained them control of the match. The first came in the last 10 minutes of the opening quarter - four goals. A five minute burst half-way through the third quarter in which three goals were scored put an end to what had been a spirited Geelong fightback. The Blues led by 29 points at quarter time and looked likely to go on to crush Geelong. But they were hard pressed to improve on that margin for the rest of the match. Carlton led by 29 points at half time and by 30 points at three-quarter time. Geelong reduced the leeway to 17 points during the final quarter, but Carlton steadied to run out comfortable winners. Carlton centre half-forward Mark Maclure turned in a match winning performance. Maclure had 21 kicks and took 13 marks in a magnificent display of forward play. Vin Catoggio was another of the Blues stars. Catoggio used his great baulking, weaving, pace and excellent disposal skills to rip holes in the Geelong defence. Captain-coach Alex Jesaulenko played Catoggio on a half-forward flank throughout the match, and this proved to be an excellent move. Catoggio capped off a fine game with three brilliant goals. Carlton well and truly had the Cats measure. - Tony Greenberg Inside Football.''