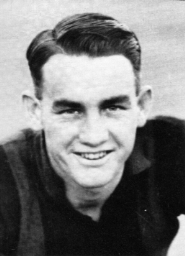 The story of Ernest Edgar Henfry and his impact at Carlton in the years after World War II is written large in club folklore. A champion centreman from Western Australia, Henfry was sensationally appointed captain of the Navy Blues in 1947, after he had played only two games for the club while on leave from military service. At the culmination of his very first season, he led Carlton to a famous Grand Final victory over Essendon.

Henfry first made the sporting headlines in his home state in 1939, when he was selected to represent the Sandgropers against Victoria at the age of just 17. Quick and athletic, with outstanding balance and foot skills, he won Perth Football Club's Best & Fairest in 1941, and was runner-up to Haydn Bunton in the Sandover Medal. His future in football was under a cloud by that time however, because World War II was raging across the globe, and Ern had already joined the many thousands of Australians who had enlisted in the armed forces.

Henfry’s early military training took place in the khaki uniform of the 16th Australian Infantry Battalion, and he was promoted to the rank of corporal before he was granted a transfer to the RAAF in 1942. Commissioned as a pilot officer at Geraldton, WA the following year, he was then sent to Bairnsdale in Victoria for further instruction. Later, he was posted to Air Force establishments at Nowra and Camden in NSW. At each of these stations he was appointed captain of the football and cricket teams.

In July 1943, Henfry was waiting for a train that was to take him home on leave from Melbourne’s Spencer St. station when he was approached by a delegation from the Carlton Football Club. After some earnest discussions, there were handshakes all round. A few weeks later, Ern turned up at Princes Park to play the first of his two matches on permit from Perth.

In both games – a record-breaking demolition of Geelong in round 17, 1944, followed by a costly one-point loss to Footscray the following week - Henfry stunned everyone with his ability. At 182 cms and 82 kg he was not only bigger than most centre line players of that era - his vision and all-round skills made him a match-winner. Of course, the Blues were hell-bent on getting him to Princes Park as soon as possible, but first there was a war to be won.

After his brief introduction to VFL football, Henfry was sent to the RAAF base at Rathmines NSW - on the shores of Lake Macquarie - where he was trained to fly Catalina flying boats. Upon graduation he was posted to Darwin, and was soon carrying out operations against Japanese forces throughout the south-west Pacific. While in Darwin, he played football with Spitfires, an RAAF team which won the local Premiership. By coincidence, Phonse Kyne, captain of Collingwood, was also a member of that team.

World War II ended in May, 1945 with the unconditional surrender of the Japanese government. However, Henfry didn’t make it home to Perth until October of that year, when he was discharged with the rank of Flight-Lieutenant. Soon he had resumed his pre-war job as a Commonwealth Bank officer, while an influential Blues supporter was arranging for him to be transferred to Melbourne. When this was done, Carlton approached Perth for a clearance. The Royals refused of course, so Ern was forced to sit out the entire 1946 season. Later that year, Carlton caused a sensation by naming Henfry as successor to Bob Chitty as the next captain of the Navy Blues. It was a clever tactic by the club, because Carlton's next appeal for a clearance to the ANFC was successful, and the Blues secured their prize recruit at last. 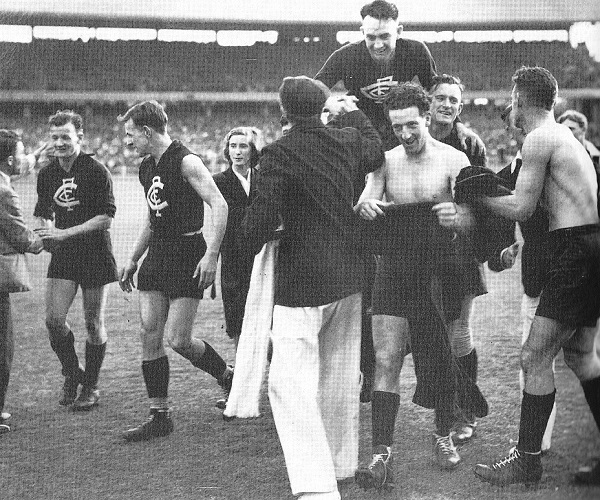 Under veteran coach Percy Bentley, Henfry's leadership energised the team right from the first game of 1947. Despite a shock loss to South Melbourne early on, Carlton were on top of the VFL ladder by round 6, where they remained throughout the rest of the home and away rounds. A hard-fought 16-point Semi Final win over Essendon put the Blues straight into another Grand Final, before Essendon accounted for Fitzroy in the Preliminary Final, and the two best teams in the competition all year met once more in the flag decider.

In a typically tense and desperate Grand Final, Henfry's duel with the Bombers' champion Dick Reynolds across the centre of the MCG proved decisive. After an even first half, Ern took control and Carlton won a thriller by a solitary point - thanks to rover Fred Stafford, who had been virtually unsighted until he swooped on a loose ball and snapped the winning goal with only seconds left to play. Celebrations at Princes Park lasted weeks, and Henfry's dream debut season was capped off when he shared Carlton’s Best and Fairest honours with Bert Deacon, who also won that year’s Brownlow Medal.

As often happens after Premiership success, Carlton missed the 1948 finals, only to bounce back in '49 to confront Essendon in the Grand Final for the second time in three years. But spearheaded by their star full-forward John Coleman, the Bombers proved way too good this time, and thrashed Carlton by 73 points - after Henfry was crunched by two opposition players and heavily concussed. Still, he had produced another stellar season, representing the VFL in two interstate matches, before edging out rising star Ken Hands to win his second Robert Reynolds Trophy outright.

Ern remained captain of the Blues until 1952, when knee and ankle injuries he had carried for two seasons eventually forced his retirement from VFL football at the age of 31. Returning home once more to the Perth Football Club, he captain-coached the Royals for another two seasons, before hanging up his boots to continue as non-playing coach. In 1955, he guided Perth to their first WAFL Premiership since 1907, with a nail-biting two point Grand Final victory over East Fremantle.

In the following seasons, Henfry coached the WA state side on six occasions, finishing runner-up in the 1956 ANFC Carnival. In 1959 he decided that it was time to concentrate on a life outside football, and told the Royals that he didn’t wish to continue. But the fires of competition were never really extinguished, and two years later Ern accepted an approach from the University of WA to coach their A Grade team in the West Australian Amateur Football League. The Students promptly won the flag, and in 1962 Ern was drawn back to Perth as senior coach for another two seasons. When his coaching career at Perth finally concluded, he had racked up 242 games with a winning ratio of 57.4%.

Ern Henfry retained his passion for the Australian game throughout the rest of his long life. In 1992 he was warmly welcomed back to Princes Park when he was inducted into the Carlton Hall of Fame, and in 2004, his name and his exploits were also added to the WAFL Hall of Fame. Three years later, in January 2007, he passed away at the age of 85 in the Perth suburb of Inglewood. Another seven seasons came and went, before he was posthumously inducted into the AFL Hall of Fame in 2014.

Henfry wore Carlton’s number 5 guernsey in his first two games on permit in 1944. When he was finally cleared to Carlton in 1947, he not only inherited the captaincy of the Blues from the great Bob Chitty – he also took over Chitty’s famous number 6.

The former Carlton champion paid tribute to Henfry and way he was leading the team during the 1947 season.
To read click here> http://nla.gov.au/nla.news-article83743800

Round 17, 1952 Carlton vs Collingwood at Princes Park.
Ern Henfry had resigned the captaincy on August 6, and had been playing in the Reserves at his own request, to try and regain some form. This match on August 16 was to be his final game for the Blues before Ken Hands took on the role of captain.