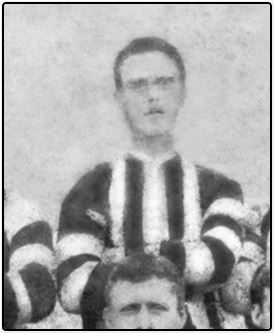 Left: F. Bernstein is pictured in his one and only game at Collingwood in 1895.
Image; Courtesy of collingwoodforever web site

Games: Not all Carlton teams/squads were published.

1894 April 21
Half-back, recruited from East Melbourne.
Bernstein named in the Carlton squad that played a Brunswick (23) side at the University Ground.

1894 May 26
Bernstein played against Fitzroy at the M.C.G.
Played beautifully, a feature of his game was was his high marking.

1895 May 02
V.F.A. Permit Committee grants F. Bernstein a tranfer to Collingwood.
(Played his one and only game for Collingwood on May 25.) 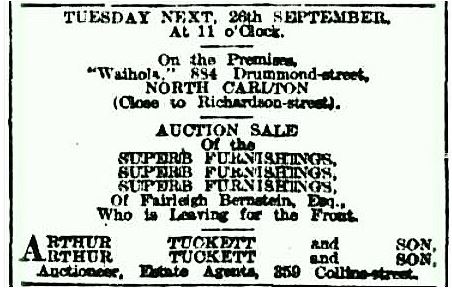 Fairleigh Bernstein, aged 41 yrs and 11 months, occupation an importer, enlisted in the Australian Imperial Force on May 08 1916. At this time he and his wife Florence (nee Davies married in 1903) were living at 884 Drummond Street Carlton. They had a son born March 10 1905. Fairleigh must have been caught up in the patriotic fervour of the time. For someone of his age to volunteer, to leave his wife and a 11 year old son seems very difficult to believe from this distance in time. He would have been twice the age of most recruits and been seen as an "old man" amongst the young men and boys. Fairleigh was given the service number 5552. Fairleigh and Florence sold their furniture and this auction was held the day after he sailed for England. His wife moved to "Frankland" a house on the corner of Alma street and St.Kilda road East St.Kilda. This could have been her father's address as he too was living in East St.Kilda at the time.
Bernstein embarked on the H.M.A.T. A9 "Shropshire" at Port Melbourne (see photo below) and sailed via the Cape of Good Hope and arrived at Plymouth England on November 11. (A significant date two years later) Bernstein was among the 15th Reinforcements for the 21st Battalion.
Fairleigh contracted mumps soon after arrival in England and was also in and out of hospital during the war with rheumatism. He was attached to Australian Headquarters in London in the Army Pay Corps where he was promoted to E/R Second Corporal. (Lance Corporal?) He returned to Melbourne on board the S.S. "Kenilworth Castle" leaving the UK from Liverpool on February 14 1919 and arrived in Australia on April 10. Fairleigh was promoted to Canteen Sergeant for the voyage. (A canteen sergeant was responsible for the management of bars, shops, cafés, and other facilities on military bases and naval ships. In Fairleigh's time it was a job given to soldiers no longer young enough or fit enough for active service. These days it is contracted out to private companies.)
Fairleigh Bernstein was discharged from the Army on July 25 1919.

There is 31 pages of his military service available on line. The last page was altered in 1947 noting his date of death as April 06 1931 (aged 57) and notes he is named as Fairleigh Benson.
All the other documents of 30 pages refer to Fairleigh Bernstein and he has signed his name as Bernstein.
Research has now revealed that Fairleigh had changed his surname to Benson within 12 months of returning home, on March 18 1920. 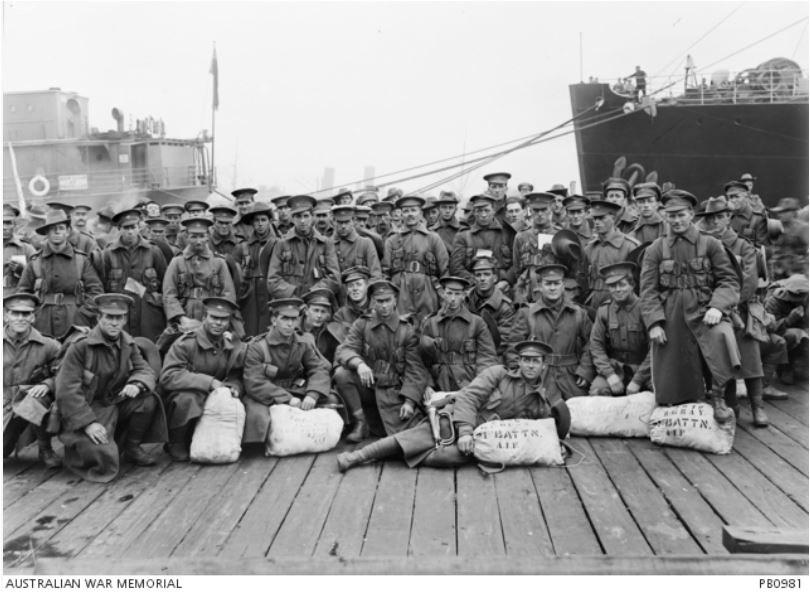 15th Reinforcements, 21st Battalion at Port Melbourne prior to boarding His Majesty's Australian Transport "Shropshire" on September 25, Farleigh is probably in this picture. At just under 6 foot (183cm), Bernstein could be one of the taller soldiers at the rear. 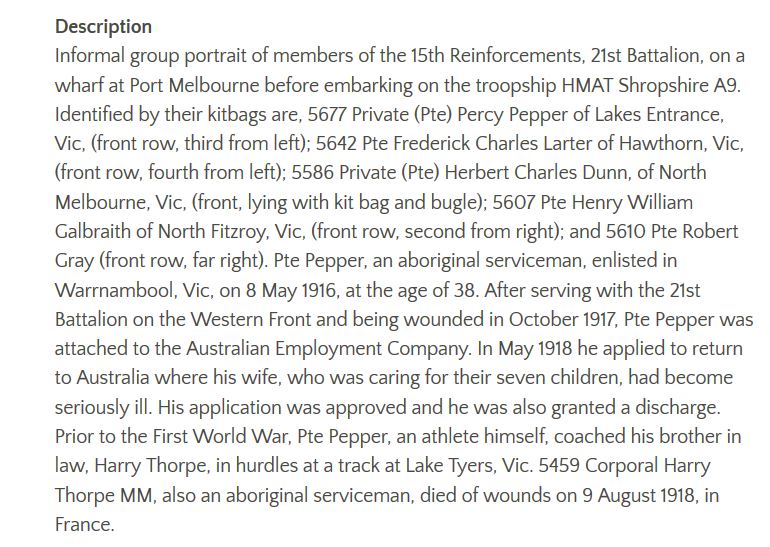 "Like many Australian battalions, the 21st could barely muster a company after the 1918 offensive*. It was ordered to disband and reinforce its sister battalions. In response, the men of the 21st mutinied on 25 September 1918. By the end of that day, the order was withdrawn, and the battalion fought its last battle at Montbrehain on 5 October. The following day it became the last Australian battalion to withdraw from active operations on the Western Front. The 21st Battalion was disbanded on 13 October 1918."
https://www.awm.gov.au/collection/U51461
.* German spring offensive of April 1918.