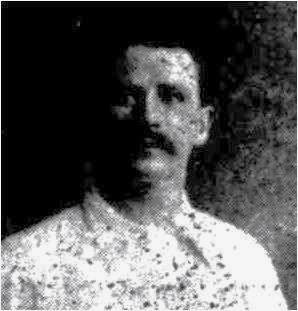 Little is known of Coffey's football time at Carlton.
He became one of the top umpires in the Association in the 1890's.

The Mail (Adelaide) (September 03 1921 p3) interviewed Frank.
Here is two parts of this interview;
"58 years ago Mr. Coffey was born in Victoria. From an early age of seven he followed the Carlton colours, and as time rolled on, he developed into one of their most chronic one-eyed barrackers - of the type that flourishes to this day. Mr. Coffey was honest enough to admit that when the "Mail" man sought a chat with the veteran referee.
But he did more than barrack with one-eye. He got to love the popular pastime so intensely that he wanted to expend some of that superfluous lung power in the direction of playing the game, and next he is seen in the arena. He appeared first in the half-back lines for the North Park Club In Melbourne, playing with men like 'Tracker' Forbes, George Stuckey, and Harry Todd. Then he was promoted to the Hotham (North Melbourne) Club in 1882, and four years later joined that grand old team of honoured tradition, Carlton.
All this was splendid experience for Mr. Coffey, who never missed an opportunity to study the tactics and art of that prince of Australian umpires, Trait. Next he is seen as an umpire, for several years performing the duties of that office in Victoria.


Who were the giants in your time?

"Among the Carltons 'Jack' Gardiner, afterwards a member of Parliament, first come to mind. He was wonderfully good at running with the ball either nr the wing or half-back.
Burly George Roberston (about 17st.) was an astonishingly agile man for his size, and one of the most solid players for Carlton.
'Billy' Dedman was a famous goal-sneak who afterwards played in South Australia.
'Billy' Goer was one of the trickiest performers of his time, and 'Paddy' Gunn was a little wonder as a rover. He was only about 10st. but he feared no man.
'Topsy' Waldron and his brother were two of Carlton's best. 'Topsy' had a style all his own. He was remarkably good at twisting and dodging, and the most elusive player I have ever seen.
George Kennedy and his brother Kirk were also two great exponents of the game. They migrated to South Australia and played for South Adelaide. George was elected captain in the days of that great statesman 'Charlie' Kingston, who was himself a bit of a footballer, though too big and bulky to come to the front rank."

1886 April 17
Coffey named in the Carlton squad to play Star of Carlton at Princes Oval in a pre season game.

1886 May 8
Coffey named in the side that played Melbourne at the M.C.G.

1886 May 24
Coffey named in the squad that played Ballarat at Ballarat.

1886 May 29
Coffey named in the squad that played South Melbourne at the M.C.G.

1886 June 5
Coffey named in the squad that played Fitzroy at Fitzroy.

1886 August 7
Coffey named in the squad to Essendon at the East Melbourne C. G.

1886 August 14
Coffey named in the squad to play Williamstown at Princes Oval.

1886 August 28
Coffey named in the squad to play Melbourne at the Friendly Societies Ground.

1886 September 4
Coffey named in the squad to play Hotham at the Hotham Recreation Reserve, Arden Street.

1886 September 11
Coffey named in the squad to Geelong on the Corio Cricket Reserve.

1886 September 18
Coffey named in the squad that played Richmond at Princes Oval.

Frank writing in his column "Giants of Sport" April 25 1929 (p11) 'Sport' (Adelaide) tries to recall the first football match he saw.
These are excerpts from his column;
Coffey was writing as if to himself;
"Good day Frank, dry weather isn't it? Yes, we could do with a few good down pours. The playing grounds are hard as bitumen. That's nothing Frank. I remember way back in the early days when Carlton and Melbourne played on a hard dirt ground outside the celebrated Melbourne Cricket Ground."

"Do you know, the other day I tried to think out the man who could go back to the pioneer days of football. The deaths of veterans like George Searcy* and Charlie* (Waldrine?) removed the two oldest authorities I can remember, so now it looks as if A. E. (Topsy) Waldron is the one who can go back the farthest.
I can remember seeing "Topsy" playing for Carlton on the top of the hill in Royal Park between North Melbourne and Carlton in the seventies with Paddy Gunn, George Robertson, "Squash" Robertson, Billy Nudd, Billy Dedman, Peter Lacey, and Skipper Jack Gardiner.
In those days Frank, it was more man-to-man play; everybody had to keep his place, and my word the football was decidedly interesting, clean with great high marking and long drop and place kicking predominating. Running with the ball and shepherding were also two grand features.
In the early seventies I saw Harrison, the father of our game, who is still alive in Melbourne, run with the ball for the Melbournes. By jove, he was a clinker. I also saw the late Lou Suhard, a fine burly fellow, play for Melbourne. Yes, methinks Topsy can go further back in football history than any other South Australian. It would be very interesting to listen to some of his experiences".
.* Both South Australian identities. Waldrine is Blueseum's guess, his name is mentioned earlier in the article.

Old football supporters will learn with regret of the death in South Australia this week of Frank Coffey, who played football for Carlton in the nineties (?), and afterwards became a leading umpire.
He umpired in three States, Victoria, South Australia, and Western Australia.
He was aged 69 years.
(The Argus Friday December 2 1932 p12)

Frank Coffey aged 69, died in his sleep at his Adelaide home in the early hours of Tuesday, November 22 1932. He was the leading umpire in the 1890's in South Australia.
Frank also wrote for the Standard and Sporting News newspaper where he was held in high esteem.

Early in 1878 a Francis P. Coffey of Melbourne signed a petition calling on the Melbourne City Council to provide a permanent ground for the Carlton Football Club. He would then have been aged 15, same person?