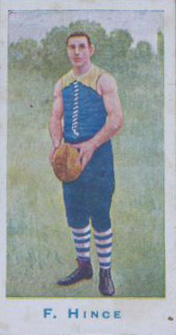 Frank Hince who was born in Carlton, played 36 games for Carlton after debuting in Navy Blue in Season 1903. He had made his league debut at Fitzroy in 1901 where he played 17 games. He was recruited from Fitzroy, after originally starting out with Fitzroy Crescent.