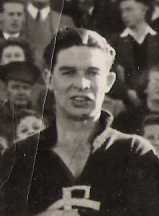 An athletic follower-forward who, like his sibling, played hard, physical football, Frank McGrath signed up for the Australian Militia in 1943. But after less than twelve months in khaki, McGrath transferred to the RAAF and was approved for pilot training. By early 1944 he was stationed at Point Cook, so he took the opportunity to join his brother Shane at Melbourne Football Club, where he managed two senior games for the Redlegs in 1944.

However, when Melbourne told him that his opportunities would be limited if he wanted to stay, Frank crossed to Carlton in 1945. He wore guernsey number 19 in eight senior matches between rounds four and sixteen of that triumphant year for the Blues, only to retire two weeks before his 28th birthday, when the club’s match committee told him that he would not be selected for the finals.

Back home at the family farm in northern Victoria, Frank went on to captain and coach both Charlton and Boort. When his playing days ended, he served as President of the Boort Football Club, and later, the North Central League. Apart from his period of war service, he spent his entire working life on the land. The father of seven children, Frank McGrath passed away in May, 2008 at the age of 90.

McGrath was born at Lake Marmal, which is between Boort and Charlton, Boort is the club that he was originally recruited from.