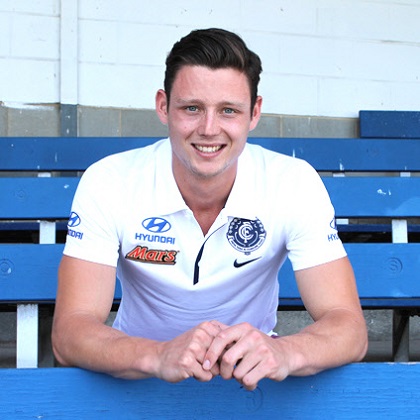 While completing his studies at Geelong College, Fraser Russell represented Country Victoria at both Under-16 and Under-18 level. In 2010 he was playing TAC Cup with the Geelong Falcons, and briefly trained at St Kilda. However at the end of that year, he decided to give football away and concentrate on athletics – specifically the 200 and 400 metre sprints.

In 2014, after narrowly missing qualification for the Glasgow Commonwealth Games, Russell decided to pull his football boots on once more. He played four VFL matches with the Northern Blues late in the season, and in November he was a surprise selection by Carlton in the Rookie Draft.

Taken as a fourth round selection at number 58, Fraser became a category B rookie, meaning he was ineligible to play AFL football in until he earned promotion. He spent all of 2015 in the VFL, playing a variety of roles in defence and attack for the Northern Blues, but was cut from Carlton’s list at season’s end.